The operators of a newly built block of short-stay apartments just 150 metres from Elephant & Castle Tube Station have named their building 'Lambeth North'. 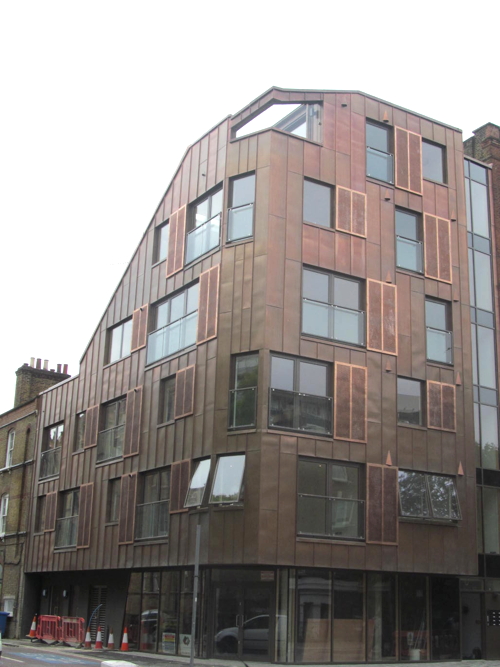 The striking copper-clad block at the corner of St George's Road and Elliott's Row has been built on the site of the former Lye Torng Thai restaurant.

Despite the fact that the site is in the borough of Southwark and a mere 150 metres from Elephant & Castle's Bakerloo line station, City Marque has chosen to market the apartments as being situated in 'Lambeth North'.

The building is nearly three quarters of a kilometre from the tube station of that name and is located in a different borough.

City Marque claims that St George's Road is "merely a stone’s throw away from the River Thames" – though in reality the river is at least 1.25 kilometres from the serviced apartments as the crow flies.

Local residents, however much affection they have for the Elephant & Castle, may struggle to recognise the area from this description on City Marque's website: "Located near the young design Mecca built around University of the Arts, Lambeth North boasts a youthful and creative vibe with lots of fun activities to partake in while placing you in the midst of some typically picturesque London streets complete with Victorian squares."

Some local residents are unimpressed. Andy Beauchamp, chair of the Perronet House Tenants' and Residents' Association, said: "First we get called 'Kennington borders' by estate agents, then Lend Lease try to change the name to sound more edgy and now developers are cruelly instructing guests to alight from the tube at the stop before and walk across the border from Lambeth to Southwark to get to Elliott's Row."

He added: "By 'youthful vibe' I assume they mean you will be kept awake at night by the parties in the car park next door at the rear of the London College of Communication situated in the heart of London at the Elephant & Castle."

A one-bedroom apartment in the building costs Ł265.20 a night for dates in September with a minimum two-night stay.

The City Marque company has its registered address in Southwark but all bookings and enquiries are handled through a call centre in the Philippines.