Now that a row of historic buildings on Borough High Street has been demolished to make way for a new hotel, archaeologists are investigating the layers of local history underneath. 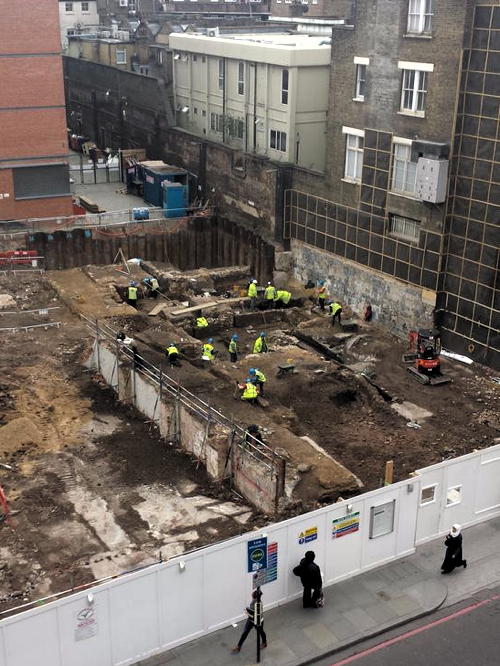 Last year Southwark Council approved the controversial planning application for the development which includes a Premier Inn hotel and a Tesco Express supermarket.

With the site now cleared of buildings, a team from Pre-construct Archaeology moved in earlier this month to carry out an excavation.

So far evidence has been found of late to post-medieval buildings which are related to the Nag's Head Inn.

There is evidence of large stone walls, some of which incorporate broken up building material, including decorated stonework from a high status building.

The Nag's Head was one of the many inns which lined Borough High Street, of which The George Inn is the only survivor. In Victorian times the inns became local parcels depots for the major railway companies, with the Nag's Head being used by the Great Western Railway.

The team has also discovered a sealed-up World War II-era access tunnel which runs from Borough High Street down to the former City and South London Railway tunnels.

Abandoned in 1900 when the alignment of the Northern line was changed, in 1939-40 the tunnels under Borough High Street were converted into an air raid shelter for up to 14,000 people.

The access tunnels to the shelter – including the one at 143 Borough High Street – were sealed up with concrete plugs after the war.

According to a report by Pre-Construct Archaeology submitted to Southwark Council last year as part of the planning process, London Underground will not allow access to be broken through from the former air raid shelter entrance as they are "concerned that if poisonous gases have accumulated in the tunnel that they could be released into the Underground and shut the Northern line".

The archaeological work will continue until July and the team hopes to find evidence of Roman occupation.