Masking tape blamed for window that fell from office block

Investigators probing an incident in which a pane of glass fell from a 20-storey office block in Blackfriars Road have blamed an errant piece of masking tape. 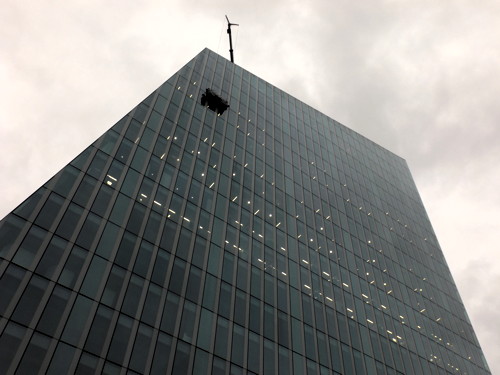 No-one was injured when the glass panel fell from the 240 Blackfriars building in early October 2014.

A scaffolding deck was quickly erected and remained in place for more than six months whilst the cause of the incident was investigated.

"Our collaborative approach with our contractors on matters of health and safety was well illustrated at 240 Blackfriars Road, SE1, where in October 2014 a single outer pane of a double glazed unit fell from the building," said GPE in its annual report.

"There were no reportable injuries resulting from the incident.

"However, we worked with our contractors and consultants immediately to ensure the safety of our tenants and neighbours including the erection of a protective scaffolding canopy around the lower levels of the building whilst simultaneously carrying out an investigation into the cause of the incident.

"A detailed investigation revealed that a piece of masking tape used during manufacture was inadvertently left in place on this single pane which eventually caused it to become detached from the cladding unit.

"Our investigation works are almost complete and we expect to establish that the manufacturing error was limited to this individual pane of glass."

Great Portland Estates recently reported that it had achieved a 55.9 per cent profit on costs at the 240 Blackfriars scheme.