Transport for London has launched a public consultation on plans for an office block above Southwark Tube Station, as part of a scheme that will also see new council homes developed alongside nearby Styles House. 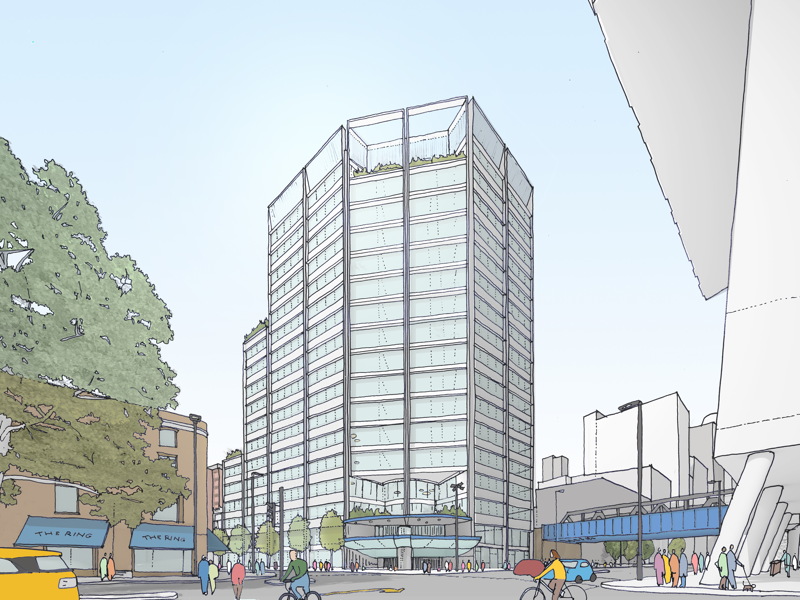 At 71 metres, the proposed tower would be taller than TfL's Palestra office building on the opposite side of Blackfriars Road which stands at 56 metres.

Sketches show the proposed building having at least 17 storeys. The scheme has been designed by Allford Hall Monaghan Morris, whose other local work includes the 240 Blackfriars office building.

Next month it will be 20 years since Southwark Underground Station opened as part of the Jubilee line extension. Development above the station was always anticipated but has taken two decades to get to this stage.

"Our plans offer the opportunity to create a new sustainable landmark for Southwark and a focal point for the community, which will help it be recognised as a vibrant and attractive destination in the capital," said Graeme Craig, director of commercial development at TfL.

"Reflecting the entrepreneurial spirit of the surrounding area, we are providing retail and commercial opportunities, while also delivering improvements for the local community, making the space greener and more accessible.

"We have taken on board the feedback from our initial consultation and invite the local community to again share their views on our designs, so that we can work together on our vision for Southwark."

Paul Monaghan, founding director of Allford Hall Monaghan Morris, said: "Our approach aims to provide a strong gateway along Blackfriars Road, while responding to the intimate scale at street level along The Cut and Isabella Street. We look forward to developing our proposals in the coming months."

Transport for London is working with Southwark Council and the Styles House Tenant Management Organisation on a land swap which would see at least 24 new council homes developed.

The council's part of the transaction was given outline approval by the borough's cabinet in April. Styles House residents have continued to press the council to ensure that the commitment given by council leader Peter John in 2015 – that any deal affecting homes and gardens would need their approval – is honoured.

Cllr Leo Pollak, Southwark's cabinet member responsible for new council homes, said: "Southwark Council has worked closely with TfL to ensure that any development around Southwark Tube station enables the neighbouring residents at Styles House to shape their evolution of their estate and design new council homes on the adjacent site.

"The strength of our partnership with TfL has always been in putting residents first, and I'm confident the emerging plans for the wider site will do exactly that."

TfL is hosting two public exhibitions at Platform Southwark in Joan Street and the online consultation continues until 26 November.

An application for Southwark Station to be given listed building status was rejected in 2017.