A 15th-century copy of the Agincourt Song, heard in Borough High Street 600 years ago, is on display at the Tower of London. 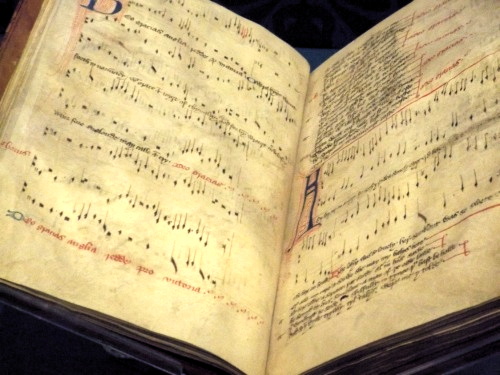 The manuscript from Oxford's Bodleian Library is included in The Battle of Agincourt Exhibition at the Tower of London marking the 600th anniversary of Henry V's defeat of the French.

The Battle was fought on St Crispin's Day 25 October 1215 but it was not until 23 November that triumphant Henry V returned to London.

Although the King had set out from Southampton with over 8,000 men, his return was with a small party by way of Calais and Dover in order for him to visit St Thomas Becket's shrine at Canterbury.

Afterwards he followed the pilgrim road back to the capital spending his last night on the road at Eltham.

Early on Thursday 23 November Henry rode across Blackheath to come up the Old Kent Road and Tabard Street. As the royal party turned into Borough High Street at St George the Martyr Church they heard a choir assembled outside sing the Deo Gracias Anglia, now known as the Agincourt Song.

St George had been invoked on the battlefield and, after Henry's visit to The Borough's St George Church, one of his first acts was to ask for St George's Day 23 April to be given major feast status.

The King went back to the church in 1417 and requested that, when the time came, his funeral procession to Westminster Abbey should begin at the Southwark church, the oldest church in London dedicated to England's patron saint.

However in 1521 Henry died whilst in France and so his body passed the church on its way back from Dover to rest at St Paul's Cathedral before the funeral at Westminster Abbey.

The centrepiece of the exhibition at the Tower is a model of the battlefield made with soil from Agincourt and featuring figures of people known to have been involved in the battle.

There is an easy search facility where visitors can check if any of their ancestors took part on either the English or French side. Names can be checked against lists of men-at-arms, archers, knights, nobles or 'others'.

Also on display is copy of Shakespeare's First Folio open at 'The Life of Henry the Fift' [sic]. The play, which is responsible for giving the Battle of Agincourt such a high profile today, had its world premiere at the Globe on the day the Bankside theatre first opened its doors in 1599.

An accompanying book The Battle of Agincourt, edited by Anne Curry and Malcolm Mercer, is published by Yale University Press (Ł30).