Princess Alexandra was guest of honour at a civic service held to celebrate the Queen's Diamond Jubilee at Southwark Cathedral on Thursday night. 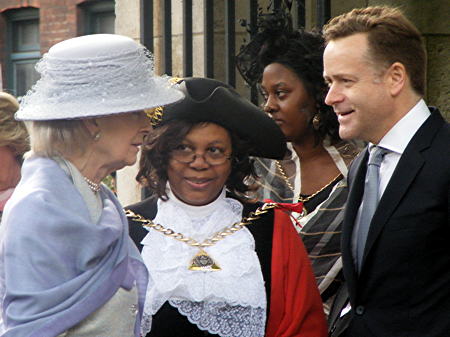 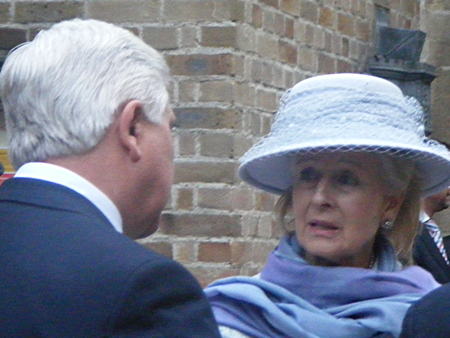 The ecumenical service reflected the huge changes that Southwark has seen during the Queen's 60 year reign. Indeed, the modern borough of Southwark was not formed until 1965.

"Of course, in the midst of change it's good to have stability, and that in many ways is what Her Majesty the Queen has provided; that strong sense of duty and commitment at the heart of our nation," said the Dean of Southwark, the Very Revd Andrew Nunn, in his words of welcome.

"Within this borough and this community, this church also represents stability and constancy," he said of the cathedral.

He continued: "Today, Southwark in all its manifestations – church and state together – seeks to build a community which always includes and never excludes; which sees diversity as a blessing and difference as an essential part of God's good creation."

Aylesbury Estate campaigner Jean Bartlett MBE, Simon Hughes MP and Val Shawcross AM shared their memories and impressions of Southwark during the service.

Actor Timothy West read the prologue from Henry V during the part of the service dedicated to the 1990s, the decade which saw the completion of the replica of Shakespeare's Globe at Bankside.

Music was provided by the Southwark Cathedral Singers, the David Idowu Choir (a youth choir set up in memory of the teenager murdered on the Tabard Gardens Estate) and the House of Praise Choir.

"The cultural, ethnic, religious, social melting pot that is modern Southwark is its greatest strength – just as it has always been its defining characteristic," said the Bishop of Southwark, Rt Revd Christopher Chessun, in his sermon.

"It is wonderful to be part of this borough. The riverside has been renewed and regenerated with Tate Modern giving cathedral-type space to modern art; the reconstruction of the Globe after many centuries gives us a wooden 'O' into which 'to cram the very casques that did afright the air at Agincourt' (as the prologue to Henry V suggests). Side by side on the river we delight in contemporary images and our theatrical heritage nightly brought to life.

"The docks have been reimagined and redeveloped; provision of social housing continues to be a challenge; open space and park-land continues to be at a premium and we await the completion of the regeneration of Burgess Park.

"Our civic representatives have come and gone and have also played their part, giving unstintingly of their time in the service of their neighbours.

"Multinational companies and newspapers find their home in the borough, engineers reach for the sky, building in glass and steel, and along with the rest of London we wait to welcome the world in Olympic endeavour."

He added: "The harsh fact is that our growth in material worth has been at the expense of our relationships with one another and our common life together. Inequalities have widened and this will need urgently to be addressed if long term social cohesion is to be advanced.

"What the Diamond Jubilee celebrations have shown us and what any of us who are involved in civic life or who work amongst the people of our borough know only too well is that it is still possible to have a vibrant, happy, supportive common life.

"The challenge of the next phase of our life as a borough will be encouraging this community awareness and identity, strengthening and supporting those who want to reach out to their neighbours those who want to bridge gulfs of inequality and lack of opportunity.

"There is much in this great borough to be proud of, yet all around us we see the work that is to be done."

The service concluded with an act of commitment, led by Bishop Christopher Chessun with with his Roman Catholic counterpart, Archbishop Peter Smith, in which all present were invited to promise to work together for the good of the borough and its people.