Lambeth Council has revealed new details of its intentions for the current Waterloo Library building after the service moves to the Oasis Centre later this month. 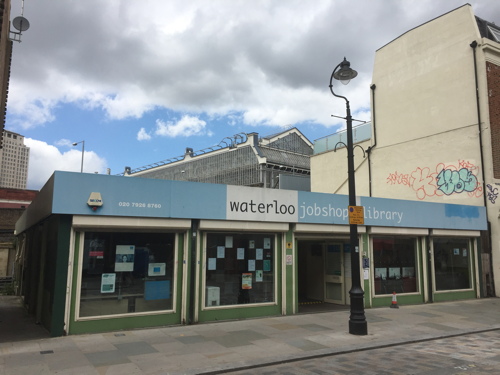 Waterloo Library in Lower Marsh is expected to close in a matter of days when a new unstaffed room with books and computers opens at the nearby Oasis Centre in Kennington Road.

The council describes the new space as "a self-service library, with Lambeth librarians on site every day for up to two hours".

A Lambeth Council spokesman has confirmed that the new library "will occupy a space around half the size of the current premises".

He added: "There will, therefore, be fewer items of stock available, but by using movable furniture creating a flexible space, the stock levels will be kept as high as possible.

"Library members and local residents will continue to have access to books in different formats, DVDs and a range of online resources and will be able to order books from any other Lambeth libraries. The stock will be refreshed regularly by librarians."

Books for the new Waterloo library will be transferred from Carnegie Library and Minet Library – both currently closed under Lambeth's controversial plans to create fee-paying gyms in the library buildings.

This will enable the Lower Marsh library to stay open until the Oasis Centre facility is ready.

In February this year the council launched a tender process to find a user for the current Waterloo Library building as a "meanwhile space".

We asked the council for an update and a spokesman told us: "The current Waterloo Library site at 114-118 Lower Marsh will be re-used as a temporary creative hub, prior to longer-term redevelopment of the site.

"The facility responds to the growing concern about the rising cost of workspace particularly for start-ups and micro businesses. The existing Waterloo Job Shop operated at the site by South Bank Employers Group will remain, continuing to deliver its existing local support programme, supporting long term unemployed people into work.

"Meanwhile Space CIC is a social enterprise with a successful track record of delivering temporary use projects supporting high streets and local communities across London.

"There will be a target of 70 per cent of small businesses benefiting from space at the facility being Lambeth residents.

"During July and August, Meanwhile Space and WeAreWaterloo BID will issue a call for interested organisations who want to take up space within the creative hub, and also for ideas to bring Granby Place into use. Granby Place is at the rear of 114 Lower Marsh site off the high street."

The library building will be marketed under the 'Granby Place' brand name.

A planning application (16/04048/FUL) for change of use of the Lower Marsh premises has now been submitted to the council's planning department.

According to documents submitted as part of the planning application, "the creative hub is forecast to support between 22-25 jobs on site, therefore increasing employment on the site by at least 1100 per cent" compared to the two staff usually on duty at the library.

• Lambeth library campaigners will be holding a protest outside Lambeth Council's meeting on Wednesday evening.