Waterloo Library in Lower Marsh has closed its doors for the last time as Lambeth Council prepares to replace it with a self-service library in the nearby Oasis Centre. 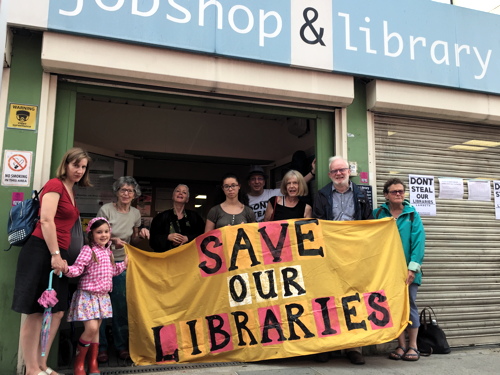 Lambeth Council had said that the new library would open on Monday 25 July and the Lower Marsh building would remain open until then.

Library staff were expecting to run the usual Friday morning toddlers' storytime for the final time this week.

However, the council decided – without prior announcement – that Thursday would be the existing library's final day.

"The staff were not told until they turned up to work this morning to find senior managers securing the doors," said Lambeth UNISON in a statement.

The new library at the Oasis Centre will be half the size of the Lower Marsh premises.

It will have longer opening hours (weekdays 9am to 6pm and Saturdays 9.30am to 5.30pm) but crucially will not have a permanent Lambeth staff presence.

The council says that Waterloo will be "a self-service library, with Lambeth librarians on site every day for up to two hours to help users, process new members and answer enquiries".

A council spokesman told us: "Waterloo Library will re-open at the Oasis Centre on Monday as planned.

"To help make sure transition goes smoothly and to ensure the new library will be open in time for the start of the school summer holidays the old location has now closed.

"We thank residents for their understanding."

The former library in Lower Marsh will become a 'creative hub' with office space for small businesses and a pop-up shop.