Lambeth Council is inviting local residents and businesses to comment on plans to introduce a Public Space Protection Order (PSPO) to combat illegal gambling on Westminster Bridge and the Golden Jubilee Footbridges. 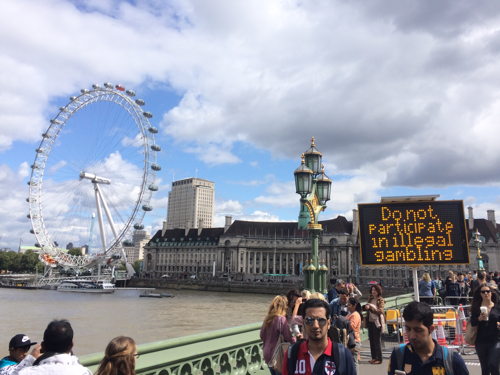 After years of complaints about illegal gambling on Westminster Bridge, the City of Westminster and Lambeth Council have teamed up with the police on both sides of the river to propose a Public Space Protection Order (PSPO) covering street gaming and gambling.

Although the gambling scams like the cup and ball game are already illegal, the antisocial behaviour linked to the games is not.

A PSPO would give both councils and police the ability to fine people who are contravening the terms of the order.

Local authorities on both sides of the Thames are proposing to implement identical PSPOs.

On the South Bank, the PSPO would cover the section of the riverside between St Thomas' Hospital and the edge of the borough of Lambeth at Bernie Spain Gardens. Away from the river, the area would extend to York Road and Stamford Street.

Research by Westminster City Council shows that illegal street gambling/trading/performing has directly accounted for at least a quarter of criminal offences on Westminster Bridge within the last two years.

Between January and September 2015, police made 211 arrests for offences of illegal gaming and related offences, following up with 54 post-conviction Criminal Behaviour Orders (CBO).

Further details of the proposed PSPO can be found on the Lambeth and Westminster websites; the consultation period ends at 5pm on Friday 9 September.