Walk along London Road and your movements will be seen 3,500 miles away on a busy street corner in Canada's largest city. 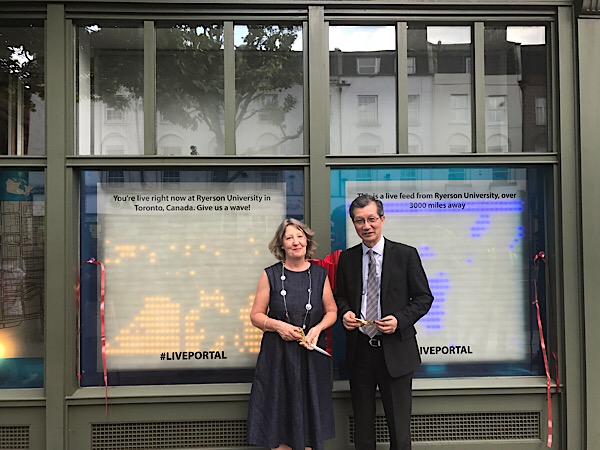 The Live Portal is an art project devised by university students either side of the Atlantic to create a virtual connection between the cities of London and Toronto and to link London South Bank University at the Elephant & Castle with Ryerson University in Toronto.

70 students responded to the call to participate in the project. The brief was to creative connectivity between the two universities and cities.

The winning proposal was from a group of nine students who worked together to design the responsive installation which tracks movements and sounds via Kinect sensor trackers at one end of the portal and creates a reactive visual display with LEDs at the other end.

The unveiling took place simultaneously in London and Toronto, revealing the window displays at LSBU's Clarence Centre for Enterprise and Innovation on London Road and Ryerson's Student Learning Centre at Yonge Street.

"What better way is there to connect people on a global stage than art and creativity?," said Charles Falzon, dean of the Faculty of Communication & Design at Ryerson University.

The joint project is just one part of an ongoing transatlantic partnership between the arts faculties of the two universities, aimed at stimulating knowledge exchange and connecting creative enterprise internationally.

"The Live Portal is an example of what can be achieved when we work together with key partners across the globe, linking our two cities and our institutions in a virtual way that symbolises the very deep cultural connection we already share," said Professor Janet Jones, dean of LSBU's School of Arts and Creative Industries.

"It's very important that students learn how to co-create across the miles, and communicate with each other virtually. That's how creative design and technology projects work in the real world.

"They are innovating cross-culturally, and across disciplines, and learning from each other. They're also reaching outside their own parochial spheres, and seeing the possibilities for international collaboration."