Jodie Kidd kayaks down the Thames to remember Cockleshell Heroes

On Thursday morning Jodie Kidd joined members of the Special Boat Service Association to kayak down the Thames from Lambeth Pier to Butler's Wharf. 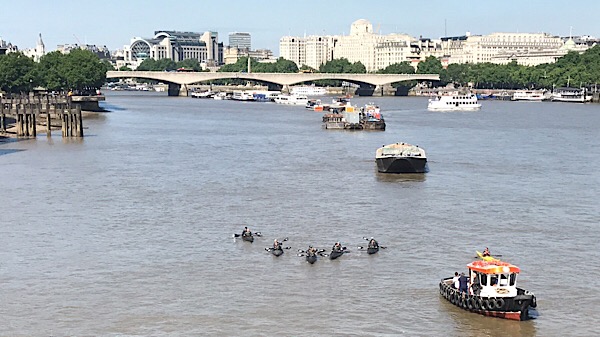 Jodie Kidd, together with members of the SBSA, recreated a training paddle made famous by Royal Marine commandos – the 'Cockleshell Heroes,' -75 years ago whilst preparing for Operation Frankton.

"I am privileged to be the patron of this event that will provide a once-in-a-lifetime opportunity for all those involved, whilst at the same time raising funds which provide assistance to those who serve in the modern Special Boat Service and their families," said Lord Ashdown, patron of Cockleshell Heroes 75.

"As a former Royal Marine who served in the SBS I am very well aware of the bravery of those who took part in this remarkable operation. The character of these men remains a guiding star for our members today."

The paddle begins a series of events organised by the SBSA building up to the 75th anniversary of Operation Frankton in which ten commandos risked all when they set off to destroy enemy ships and thwart the Nazi war effort.

Operation Frankton was one of the most dangerous raids of World War II and described by Winston Churchill as effectively shortening the war by six months.

On a cold winter's night in December 1942 the ten commandos set out in canoes – or 'cockles' – from HMS Tuna 12 miles off the mouth of the Gironde estuary. Their objective was to destroy a blockade of German cargo ships laden with supplies intended for the Nazi war effort 70 miles upriver in Bordeaux.

Their journey took them four nights, battling inclement weather and German patrols and only four men reached Bordeaux – commander Major Herbert 'Blondie' Hasler and Marine Bill Sparks in one canoe, and Corporal Laver and Marine Mills in another.

The four remaining commandos attacked the German boats planting their explosives before fleeing.

Only Hasler and Sparks made it into Spain and down to Gibraltar, and the mission was hailed by Lord Mountbatten as "the most courageous and imaginative of all the raids ever carried out by the men of Combined Operations".

The commandos have since become immortalised in history, and in the 1955 film starring Trevor Howard, as the 'Cockleshell Heroes'.

• See www.ch75.org for full details of the fundraising effort