The Zip World London zip wire can stay in Archbishop's Park for the rest of the summer after Lambeth's planning applications committee gave the scheme the green light. 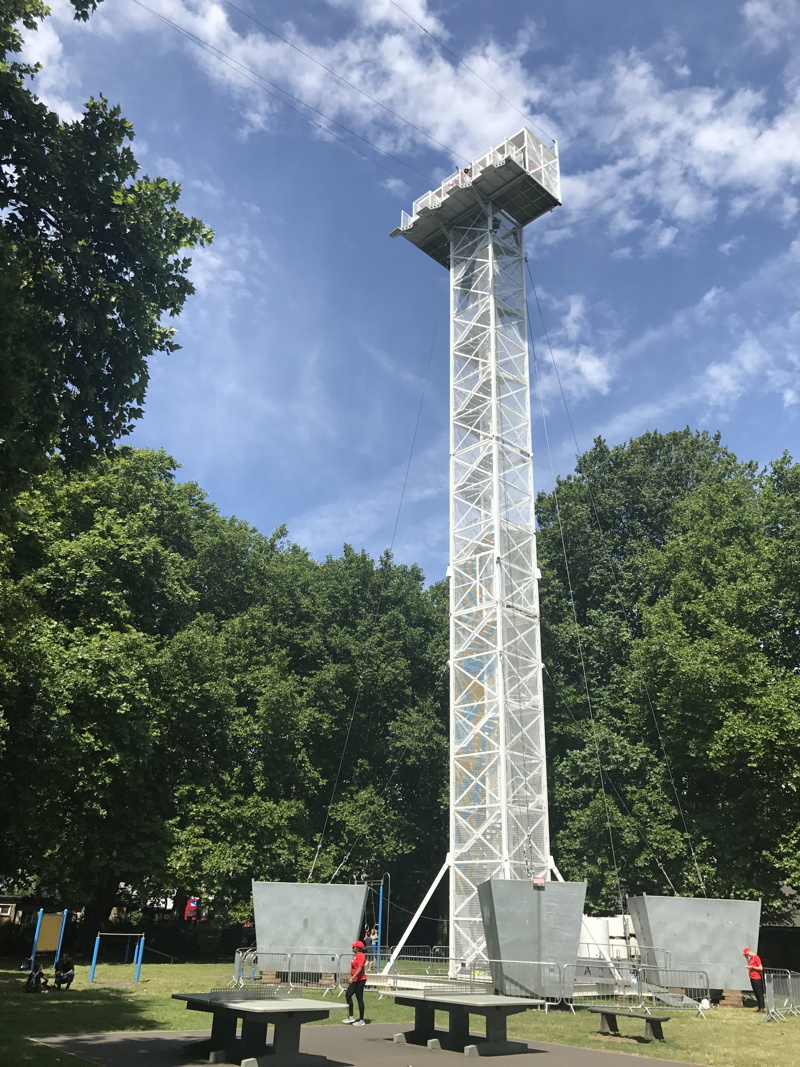 The zip wire has been constructed and opened under permitted development rights but planning permission is required if the structures are to remain in place for the rest of the summer season.

The attraction's operator – the City Zip Company – is paying Lambeth
Council around £34,000 for use of Archbishop's Park, plus a further parks investment levy of circa £7,000.

The launch tower is 35 metres high whilst the landing tower reaches 15 metres.

Riders on the twin zip wire travel above the children's play area and sports pitches as they cross the park.

Lambeth planners received 20 objections and 37 representations in support of the zip line.

It costs £22.50 for an adult to ride on the zip wire from one end of the park to another, with a journey time of less than a minute.

Lambeth planning officer Dale Jones told councillors that the proposals "do not represent an inappropriate form of development", and that the public benefit of the zip wire would outweigh the temporary harm to the Lambeth Palace Conservation Area.

The committee heard that the zip wire would boost the prestige of the borough of Lambeth.

The applicant has given a £500 donation to St John's Waterloo and offered free tickets to nearby schools and organisations.

Objecting, Michael Ball of the Waterloo Community Development Group described Archbishop's Park as "the only oasis of calm" for the 12,000 residents of Bishop's ward and warned that hundreds of screaming zip wire riders would take away the much-valued tranquility of the space.

Local resident Janet Jones said that whilst Archbishop's Park welcomes everyone, Zip World excludes young children and everyone with a long list of medical ailments.

"It flies in the face – literally – of everything this park gives us," she said.

Barry Shaverin of the City Zip Company said that he had sought to consult with park users and neighbours whilst planning the event.

He told the committee that the project would create up to 51 jobs, with two Waterloo residents among those employed.

Mr Shaverin insisted that the installation would be temporary. "I assure those present that this will not be the next London Eye," he said.

Bishop's ward Labour councillor Kevin Craig said that the zip wire would negatively affect the amenity of local residents and claimed that the planning officers' report had been loaded with "hyperbole" and "slick presentation" in support of the proposal.

Cllr Craig also pointed out that the high cost of a visit to the attraction would put it out of the reach of many local residents, pointing out that at £22.50 for less than a minute's ride it is "more expensive than a business class return to New York".

Committee member Cllr Joanne Simpson said she agreed with the officers' assessment that the benefits of the scheme would outweigh the effects on heritage.

She also acknowledged the financial benefit to the council: "It's not savoury but we do live in cash-strapped times and parks do require that money."

Cllr Liz Atkins said she was happy with the proposal as a one-off but wouldn't want it to become a permanent fixture by stealth.

She called for "extensive consultation with locals and park users" during this year's operating season to enable any future planning application to be assessed.

Cllr Malcolm Clark echoed his colleague's request for rigorous evaluation of the impact of this year's installation.

Committee chair Cllr Clair Wilcox said that the concrete ballast blocks around the towers are "quite shocking in the ugliness" and jarred with the greenery of the park.

She also acknowledged the impact of the zip wire on the park and its users: "If it was ever to happen again, I would like to have a really, really good understanding of how park users – and perhaps those who are not using the park because they don't enjoy it – feel."

The committee agreed to attach an informative note to the permission asking the applicant to work with the Friends of Archbishop's Park and the council to monitor the impact of the zip wire installation.

• Tickets can be booked at www.zipworld.co.uk/adventure/detail/zip-world-london