Revd Jonathan Coore has been installed as Rector of Christ Church Southwark. 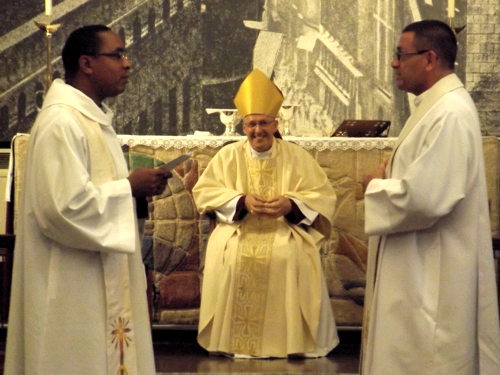 The Bishop of Southwark, the Rt Revd Christopher Chessun, was at Christ Church Southwark in Blackfriars Road on Thursday evening for the institution and induction service.

"Something has happened here at Christ Church during the months of the vacancy," said the bishop in commending the choice of Jonathan to be rector.

"All that is needed now is for encouragement to be the order of the day and the Lord will do the rest."

Referring to the gospel passage just read about Jesus giving encouragement, Bishop Christopher added that the person appointed was rector of the whole parish and charged with the responsibility of ensuring that everything was Christ-centred and outward focussed.

"If you walk around the parish you see all the amazing contrasts and opportunities: pockets of deprivation and needy community alongside the new Blackfriars Station, many signs that the City has already crossed Blackfriars Bridge soon to emerge alongside One Blackfriars."

Jonathan Coore was until earlier this summer succentor of St Paul's Cathedral whose dean and chapter crossed the river to be present for the installation.

The new rector's children led the entrance procession carrying the cross and candles.

He was presented to the bishop by Anthea Nicholson, trustee of the church's patron Marshall's Charity, owners of the Christ Church building.

Following institution by the bishop, Jonathan Coore was inducted by the Archdeacon of Southwark the Venerable Jane Steen who formally placed the new rector in his stall.

Bermondsey & Old Southwark MP Simon Hughes came direct from the nearby South Bank Forum meeting to join other guests at the reception in the John Marshall Hall.

The parish of Christ Church, whose area corresponds to the ancient Paris Garden known to William Shakespeare, embraces Tate Modern and Oxo Tower Wharf on the river and Palestra and Nelson Square inland. The southern boundary is Boundary Row and Surrey Row.

Jonathan Coore, who was ordained in Hereford in 2007, succeeds Tim Scott who is now rector of Yatton in Somerset.