A Day by The Sea at Southwark Playhouse

A Coronation year West End success has been revived at Southwark Playhouse. 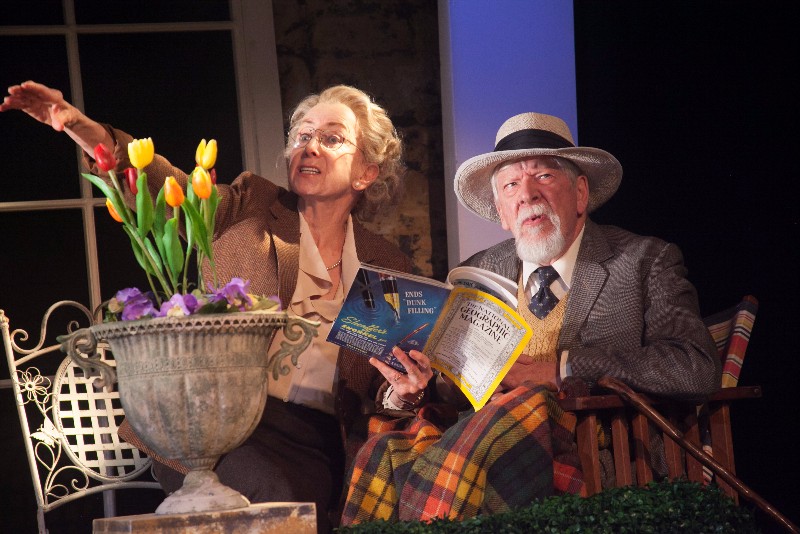 Laura (Susan Tracy) and Julian (David Whitworth) on the terrace

The setting of A Day By The Sea is the Dorset coast with the action taking place on the terrace of a house near the cliff and briefly on the beach.

The set by Alex Marker, which converts quickly from garden to sandy shore, suggests that we are looking at a photograph album whilst being told the story.

The background sound is first garden birdsong and then seagulls swooping above waves.

The play's premiere was at the Theatre Royal Haymarket in November 1953 with a star cast which included Ralph Richardson, Sybil Thorndyke, Lewis Casson and Irene Worth. John Gielgud both directed and played diplomat Julian Anson. It ran well into the following year even when the stars gave way to less well-known actors.

This delightful 2017 production is mounted by Two's Company and directed by Tricia Thorns.

The author is NC Hunter (1908-1971) who had twice served in the Army having been recalled for the Second World War. His play is about the upset of war and personal crisis which he explores in a domestic setting.

This is post war Britain when there was hope of a long peace. Communication is only by landline telephone, personal visit or newspaper. This seems surprisingly natural and makes the seaside retreat a real getaway location for the frantically busy diplomat Julian.

His only very brief distraction from work is picking up a fountain pen to try The Times crossword.

The play is perfectly cast although maybe Hugh Sacks makes visiting Foreign Office official Humphrey appear appear a little too laid back even for that profession.

Get there ten minutes early to see Julian Anson (played by David Whitworth) asleep on the terrace and have schoolboy Toby (Jack Swift) take your photo with a Box Brownie.

Unlike modern drama this is a slow tale with many themes told over the two and three-quarter hours with a very short interval.

In 1953 it is just two years after the end of the Attlee government and Churchill is back in Downing Street. Mentioning the War in this holiday household can cause argument and discussing politics is as frowned upon as Toby might be in old age in 2017 raising the question of Brexit.

Tension is relived with snatches of humour mostly assigned to the doctor (David Acton) and solicitor William (David Gooderson). But the audience only erupts with very long laughter when widow Laura (Susan Tracy), permanent resident and aged host, says what she really thinks about politicians.

This is the unintended Brexit moment written before we even entered the Common Market.

The star is John Sackville as Julian who changes in character as he is forced over 24 hours to question his workaholic lifestyle. The object of his hate and then sudden desire is childhood friend Frances played by Alix Dunmore.

Frances is ahead of her time having been twice married and divorced. It's a play with interesting resonances for today.

• Leigh Hatts played Toby in the production at the Palace Court Theatre in Bournemouth in the late 1950s.