Loyd Grossman has launched a series of Discover London Trails to promote the capital's smaller museums. One of the trails is devoted to the South Bank and Bankside - but don't be confused by the name.

"London is indisputably the museum capital of the world and I thought I'd seen all of them," said Loyd, speaking at the launch event at London's Transport Museum in Covent Garden. "But looking at these trails, I've discovered a few that even I haven't been to!"

The 10 trails have been developed by London's Smaller Museums and Galleries Group as part of MGM 2004, which runs for the whole of May.

"The idea of the trails is to encourage visitors to take a day and plan to discover some of the very, very different museums and attractions in the capital," said Ashley Jones of London's Smaller Museums and Galleries Group.

The trails can be found on the Visit London website and can be accessed in downloadable PDF format. 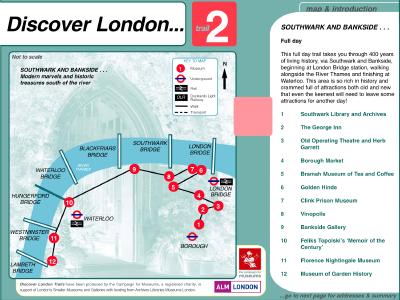 The front page of the Southwark and Bankside trail

Confusingly, the trail called Southwark and Bankside actually covers the South Bank and Bankside, from the Museum of Garden History in the west to the Old Operating Theatre in the east.

City Hall, Tower Bridge and the Design Museum are part of the Docklands and Brunel trail.

Made possible with support from ALM London (Archives, Libraries, Museums London), they are printable three to four page guides offering half and full day tours.

Each museum involved will also be taking part in the MGM London Weekend, 21-23 May, with a wide range of special events in museums and galleries throughout the capital.