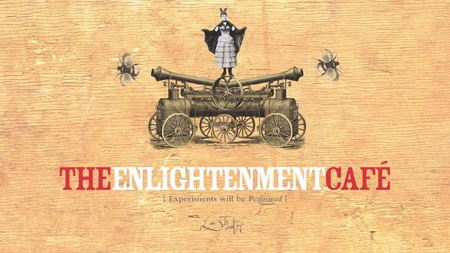 A theatrical project that combines the beauty of science with the power and imagination of immersive performance.

Originating from the coffee houses of the 17th century, Enlightenment Cafés (also known as Penny Universities) were ‘theatres of exchange’ and social hubs for new thinking in science, philosophy, politics and arts - places where ideas came together and bubbled with excitement.

LAStheatre brings this concept into the 21st century and promises it will be just as intellectually promiscuous.

The Enlightenment Café is a place of exploration where people from all walks of life can debate, play and laugh the night away. There will be fire scientists, neuroscientists, microbiologists and botanists. Scientists in residence include Tim McInerny, Stuart Clark, Alex Bellos and, maybe even Darwin. This is an interactive adventure where we can moot new theories as to why things are, how they got there and what will happen next.

The Enlightenment Café will delve into topics ranging from astronomy to paleontology, from My Little Pony to zombies and from art to invention. Only the tedious will be off limits.