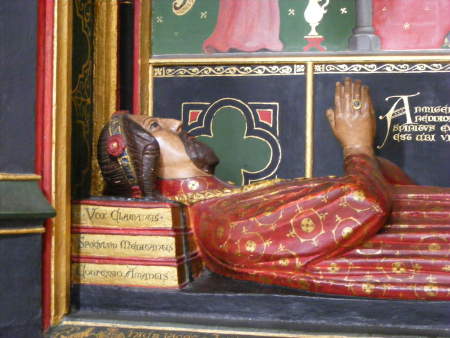 To mark the 600th anniversary of the death of John Gower - regarded as one of the founders of English poetry - there will be a special service of Choral Evensong sung by the Girls and Gentlemen of the Cathedral Choir.

Prayers will be said at Gower's tomb in the nave of the Cathedral.

There will be the first performance of a new anthem, commissioned by the Dean and Chapter and composed by local musician Huw Morgan who has set a text from the work of Gower for this occasion.

The service will be followed by readings of work by Gower, and others, in the presence of Andrew Motion, Poet Laureate, and Terry Jones (formerly of Monty Python).

John Gower, an early poet laureate and a friend of Chaucer, lived with the monks at Southwark Cathedral.

Shakespeare knew the Gower tomb in the cathedral and included him as a character in three plays including Pericles.

"We are delighted to celebrate the works of John Gower in this way," says the Very Revd Colin Slee, Dean of Southwark.

"Southwark Cathedral has many links into the rich history of the arts in this area and it is always a pleasure to be able to have an opportunity to give thanks for the many creative people who have lived and worked in this area."