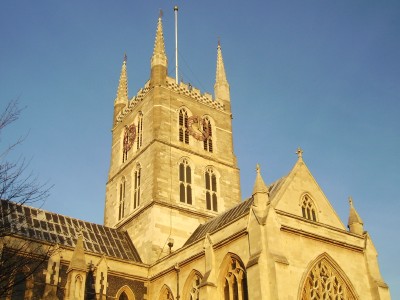 The mother church of the Anglican Diocese of Southwark.

Southwark Cathedral is a parish church which became a cathedral early in the 20th century. St Swithin of weather fame founded a convent on the site which later became a monastery. Henry VIII's closure of the priory led to the main building becoming the parish church. William Shakespeare is believed to have been present when John Harvard, founder of the American university, was baptised here in 1607. This is the year that William's own brother Edmond was buried between the choir stalls. Nearby is the Shakespeare memorial.

The Millennium Project development to the north of the cathedral includes a refectory and a shop with specially commissioned Southwark products. The cloister style courtyard is on the site of the original cloister in use when Southwark Cathedral was a riverside priory. The old and new buildings are separated by an ancient alleyway which has reopened as a glazed street called Lancelot's Link.

On Sundays the main choral Eucharist is at 11am.