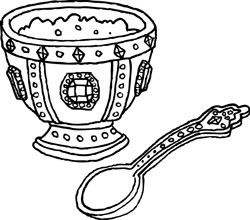 Giraffe restaurant on the South Bank is hosting porridge-making competitions for adults and children in association with porridge aficionados Rude Health.

Whilst Rude Health roller-skaters hand out complimentary bowls of their porridge, budding cereal alchemists are invited to transform a bowl of plain porridge into their own tantalising breakfast treat and dazzle the eminent porridge judges with their culinary creativity.

Contact Rude Health at [email protected] for an application form for the children's or adults' competition.

The 12 best children's entries will be invited to the final cook-off at Giraffe on the South Bank. The winner will be crowned London's Porridge Prince or Princess 2009 and presented with their prize. Two runners up will also be rewarded.

For adults Rude Health will be holding a Freestyle Gourmet Porridge Contest. Here 10 finalists will be given 20 minutes to wow the judges with their original porridge creations.

One of the judges on the day, the 2010 World Porridge Champion Anna Louise Batchelor, will be demonstrating her spectacular Spotted Dick Porridge Pudding.