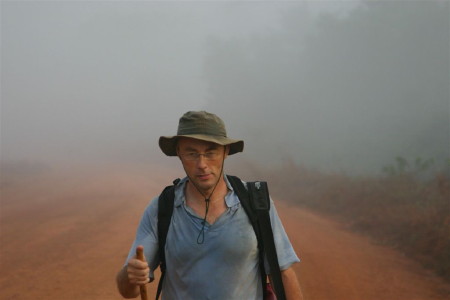 Best-selling author Tim Butcher will describe an epic 350 mile journey he completed by foot through war-ravaged Liberia and use it to draw conclusions about the future not just of that country but of the wider region.

For years Liberia was blighted by one of Africa's cruellest wars, one that Tim covered as a journalist but which was nearly impossible to explain given the savagery of the fighting.

With the fighting officially over, the Liberian hinterland is still regarded as off-limits but Tim ventured there in 2009 to try to understand what had happened to the remote jungle communities where rebel groups had thrived for so long.

He followed a route blazed in 1935 by a young Graham Greene, then a penniless author anxious to prove himself as a travel-writer. Greene took a case of scotch, a female cousin as a travelling companion and hammocks in which, occasionally, they were carried by their team of 26 bearers.

Tim took a rucksack and some water purification equipment on an exhausting but exhilarating trip.

He met 'devils', the masked figures revered in rural villages where they marshal the worshipping of ancestor spirits.

Some 'devils' were benign, no more dangerous than dancing minstrels, but Tim found evidence of other more sinister devils. His talk will be as exciting as it is educational.

Tickets £5 from the cathedral shop or email [email protected]