The winning design for the Lift New Parliament, a transportable meeting and performance space which will come to the South Bank in 2008, has been revealed. 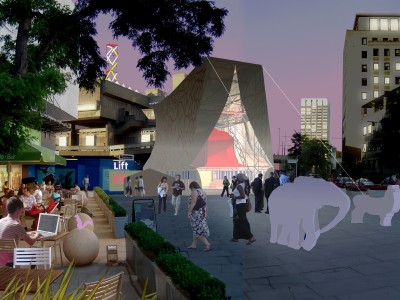 The structure, designed by architectural practice AOC with engineers Momentum and Mark Prizeman, was selected by a jury from four anonymous shortlisted designs that were put to the public to have their say in an online vote.

The Lift New Parliament will be a meeting place that hosts performances, ceremonies, forums, talks, workshops, virtual conferences, installations, and exhibitions by day.

By night, it is a beacon, an after dark installation, transmitting sound and image, radio broadcasts, films and documentation of the day's activities, communicating messages of its activities through theatre and the web.

AOC's design takes the archetypal form of a tent as its starting point, creating a flexible membrane structure. This recognisable and inherently flexible form allows for additional structures to be introduced within it, making it an evolving and playful space.

AOC is on the Elephant and Castle Early Housing Architects' Panel and recently completed an Early Years Centre at Friars Primary School off Blackfriars Road.

All four designs were presented online at the end of June and the public was invited to vote for their favourite, the result of which counted as one of eight votes cast by the jury. The results of the public vote were exceptionally close:

Given the narrow range between the four designs (5.2%), the jury did not feel the public vote should change what was otherwise a unanimous decision by the jury.

The four shortlisted schemes were selected from 56 entries submitted by teams of architects and designers from the UK and Europe. These entries were received in response to an international design competition for the Lift New Parliament, launched by Lift and The Architecture Foundation in May 2006.

"The entire process of selecting the design team for the creation of the Lift New Parliament has been extraordinary," says Angharard Wynne-Jones, director of Lift and member of the Lift New Parliament jury. "We have been buoyed by the enthusiastic response of the architectural and design community to truly open up the design process to public participation and engagement. The jury felt that AOC was the most open to participation and consultation processes and that their initial concept design was delightfully iconic and achievable."

Geoff Shearcroft of AOC said: "We're delighted. This is exactly the type of project we established AOC to do: to explore the potential for people – for all of us – to engage with the design, creation and day-to-day adaptation of the buildings and spaces we use and live in. It is a fantastic opportunity to make a beautiful public building with a client, Lift, who is clearly committed to a collaborative and rigorous design conversation."

The public and local community's contribution to the selection of the winning design team starts a two year process of participation in making the Lift New Parliament a reality – in developing the building and deciding what happens inside this new cultural space.

Once built, the new structure will be the centrepiece of the Lift Festival in 2008 which opens in Newham for 10 days, before moving to the South Bank Centre. After the Festival, it will travel nationally and internationally, hosting a programme of performances, debates, ceremonies and installations.