Radical plans to transform the derelict coach park at Potters Fields into a cultural attraction for the 2012 Olympics will be aired at the Hayward Gallery this month. 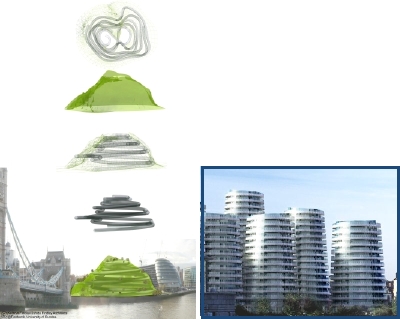 Early concepts for The Hill alongside the proposed Berkeley towers

The Hill – in development since 2003 – is an alternative to the highly controversial development of eight cylindrical residential towers by Berkeley Homes which finally gained planning permission last year after a protracted planning dispute.

Now the stand-off between Berkeley Homes and Southwark Council – who each own part of the land – continues, with the council reportedly obstructing the developer's efforts to press ahead with three of the eight towers.

In January architect Katherine Findlay presented her concept for The Hill to a public meeting of local residents held at Ahh's gallery on the north side of Tower Bridge. The proposal also attracted the backing of Billy Bragg.

As part of the 100 Ideas season the Southbank Centre is holding a free event called 3 Big Ideas for London on Wednesday 7 March.

As well as Ahh's plans for The Hill the evening will include presentations on the LIFT New Parliament which is due to come to the South Bank in 2008 and the Aluna moon clock destined for the mouth of the River Lea.

After hearing about all three ideas members of the audience will then be able to explore one of the projects in a choice of three interactive workshop sessions.

Southbank Centre artistic director Jude Kelly – who is also in charge of the Olympic cultural programme for 2012 – has already endorsed Ahh!'s proposals: "The Hill is the kind of experience you always wanted as a child. Something that encourages a sense of adventure and the thrill of the unexpected.

"This is inventive and inspirational and London needs ideas like this if it to maintain its position as a creative centre."

Last year Southwark Council leader Nick Stanton told this website: "If the world had any sense Potters Fields would be to arts and culture in 2012 what the East End is to sport."

What is The Hill?

The project's backers explain: "The project is called The Hill as that is the shape it will be – a landscaped structure rising out of a Thames side garden and enclosing a series of large rooms, caves and tunnels. It has no generic name because it will be the first of its type anywhere in the world – a gallery of installations; a cultural destination with the many of the physical thrills of the adventure park; a contemporary version of the Vauxhall Pleasure Gardens; an urban 'Eden'.

"The Hill has been inspired by works of art, architecture, design, technology; and landscape as well as natural forms and structures. It re-invents the ingenuity of earlier attractions; picks up on the popularity of commercial operations; plugs into what is happening the fields of science and technology; and uses the skills of the arts and media to communicate the excitement of discovery – both of the world around and of the world within ourselves."

Meanwhile a petition calling on the prime minister to intervene to prevent the construction of the Berkeley Homes towers closed last week with 577 signatures.

Now the Government has sent its official response to all the signatories of the petition.

Predictably it notes that "Having taken the decision to grant planning permission, the Secretary of State, and therefore the Government, has no further jurisdiction in this matter.

"Any person aggrieved by the decision was entitled to bring a legal challenge in the High Court but had to do so within 6 weeks of the date of the decision letter."