The third annual STEP Festival - celebrating the vibrancy of Southwark&#39;s theatre scene - is now under way. 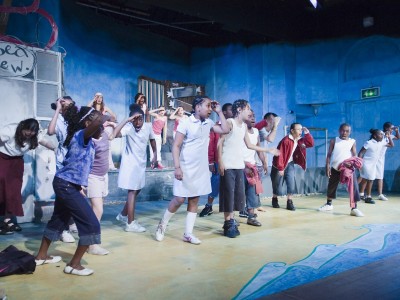 Running until 14 July the festival is a collaboration between drama specialists and artists who have come together to deliver a programme for the young and young at heart.

With nearly 30 theatre organisations taking part, this year the festival's theme is Steps to Writing. Each STEP project has been designed with the written word in mind. The aim is to inspire young people, activate their imaginations and give them the skills and confidence to be able to write.

"Following past success and due to popular demand we're organising this festival for a third year," explains Cllr Lorraine Zuleta, Southwark's executive member for culture, leisure and sports. "With so many interesting activities on offer involving such excellent theatre groups, we hope Southwark pupils will thoroughly enjoy the experience and be inspired to get writing themselves."

One such project is theatre company The Lions part – best known for their seasonal celebrations on Bankside – who will be touring schools and performing 'Stand up Shakespeare – Write Up!' where children are invited to choose words that attract or challenge them using scenes from Shakespeare's plays. Exploring the meaning and sound of their chosen words, participants will create their own dramatic moments. It is hoped that this will help the children create a personal relationship with Shakespearean language and have confidence in creative writing.

The eclectic range of activities also includes Re-Write, a group of young people who are striving to break down the barriers surrounding asylum and refuge. This project will be delivered in partnership with Southwark Refugee Artist Network and will include performance and workshops in schools and at the Synergy Centre.

Some of the ground-breaking site specific work taking part in the STEP Festival include; Shunt Theatre Company, who will perform sensational theatre pieces in the darkness of the Shunt vaults under London Bridge station.

Another site specific project is presented by Union Theatre who will be based at Guy's Hospital performing in corridors and at children's bedsides using story telling techniques and larger than life characters.

Step Out!, a series of workshops in schools will enable children and their teachers to learn about making theatre outdoors, and combine specially made props and costumes with theatre skills to produce a multi-dimensional theatrical experience. This will be showcased with a large scale, site specific performance inspired by 'Euripides' The Cyclops, Step Out! at More London's The Scoop.

Theatre Company Bold & Saucy will work with a group of young people from Willowbank Pupil Referral Unit to develop a site specific piece about their environment. The festival also brings together local schools with veterans of HMS Belfast to perform a new production which celebrates reunion and homecoming and the amalgamation of two generations. In preparation for this project Southwark schools, St Joseph's Primary and Aylwin Girls School have listened to stories from veterans of the Korean War, and slept on HMS Belfast for a night.