Fair trade organisations make their mark on the South Bank 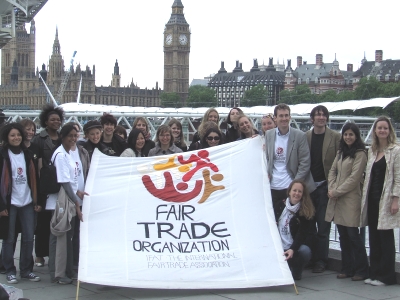 Representatives from pioneering London-based fair trade organisations including Divine, Tropical Wholefoods and People Tree posed with the banner in front of the London Eye.

The banner spenr the day travelling around London on top of an open-top Routemaster bus visiting the 10 offices of the 100% fair trade organisations based in the capital.

The banner visited the offices of the Divine Chocolate Company in Gainsford Street near Tower Bridge and the Ganesha shop at Gabriel's Wharf on Upper Ground.

The 'global journey' to launch the new Fair Trade Mark of the International Fair Trade Association (IFAT) began in Mumbai in January 2004 and has since visited 47 countries.

Southwark Council is currently preparing to submit its bid for the borough to gain Fairtrade status. Neighbouring Lambeth achieved this status in 2004.