Renowned designer Thomas Heatherwick has helped to transform the entrance to Guy's Hospital as part of a £2 million improvement project. 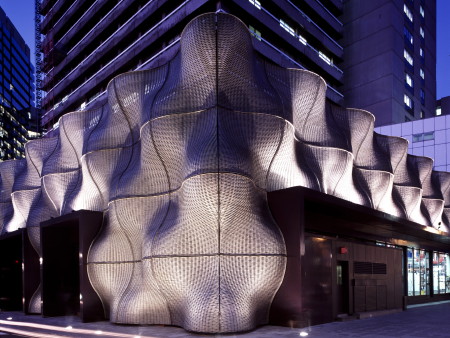 The recently completed improvement scheme has been designed to benefit patients, visitors and staff alike. It includes widened pavements for better pedestrian access, a one-way traffic system with designated drop off points, improved signage and lighting and a new shop for the Friends of Guy's Hospital.

At the centre of the scheme is the Boiler Suit, a facade designed to encase the boiler house of Guy's Hospital. Made up of 108 undulating tiles of woven stainless steel braid, the Boiler Suit is illuminated at night to provide a welcoming beacon.

"We have wanted to make improvements to the area around Guy's for some time, and I am pleased that our patients and visitors are now greeted by a much more welcoming environment," says Alastair Gourlay, capital development manager at Guy's and St Thomas' NHS Foundation Trust.

"The feedback we have received so far has been very positive, and we are now looking at ways of making further improvements to link into forthcoming developments at London Bridge."

The now-defunct Pool of London Partnership gave a grant of Ł1.4 million towards this project. Guy's and St Thomas' Charity provided Ł500,000 and the Friends of Guy's Hospital gave Ł75,000.

Karen Sarkissian, director of art and heritage at Guy's and St Thomas' Charity, added: "It has been enormously rewarding and exciting to commission such a prestigious designer to work with us. Thomas has come up with an eye catching design which you would not expect to encounter on a hospital site."