Passengers crossing the concourse of Waterloo station on Thursday lunchtime were offered slices of birthday cake to celebrate the 100th anniversary of the birth of railway artist Terence Cuneo. 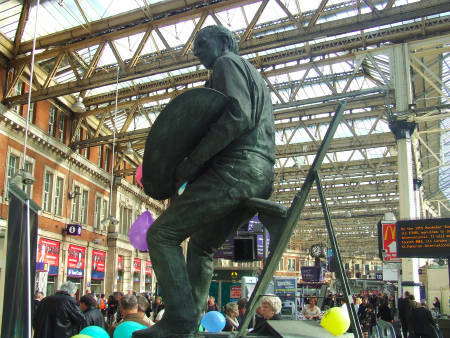 The statue of Terence Cuneo which has stood at the northern end of the concourse for the past two years was decorated with balloons and banners whilst the artist's daughter Carole and members of the Cuneo Society distributed slices of cake.

The event at Waterloo was part of a year-long series of celebrations of the life and work of the artist.

Terence Cuneo's largest painting is a depiction of the bustling concourse of Waterloo Station in the 1960s. It has just gone on public display for the first time in more than a decade at the National Railway Museum in York.

The 20ft by 10ft canvas was commissioned by the Science Museum in 1967 and was displayed for nearly 30 years in the Land Transport Gallery before being put into storage for 11 years.

The exhibition at the National Railway Museum continues until the end of April 2008.