An act of remembrance was held at the Soviet War Memorial in Geraldine Mary Harmsworth Park on Sunday to mark Holocaust Memorial Day. 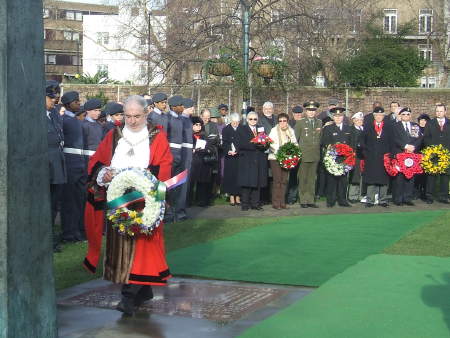 The Mayor of Southwark, Cllr Bob Skelly, lays a wreath at the Soviet War Memorial 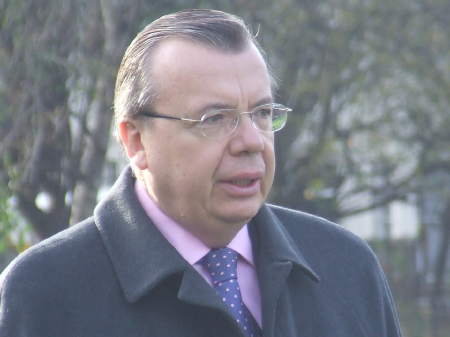 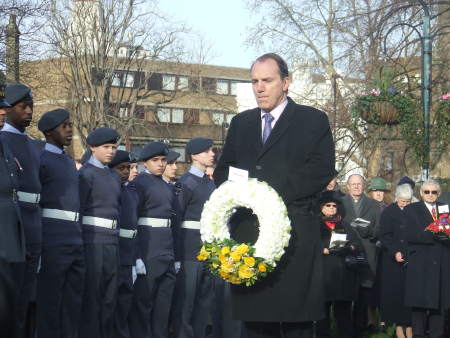 Holocaust Memorial Day falls on the anniversary of the 1945 liberation of Auschwitz-Birkenau by the Red Army.

The ceremony began at Southwark's Holocaust Memorial Tree which stands in Geraldine Mary Harmsworth Park, next to the Imperial War Museum, where Rabbi Alan Greenbat led a short service.

The assembly then moved a short distance to the Soviet War Memorial where wreaths were laid by the Mayor of Southwark Cllr Bob Skelly, Simon Hughes MP and the Russian Ambassador HE Yury Fedotov as well as representatives of former Soviet republics and veterans' groups.

"We have to recognise that the Soviet Army and the Soviet Union paid a disproportionate price in the defeat of Nazism and we should never forget that," Cllr Skelly told the assembled guests.

"Six million Jews were murdered by Nazi officers. Of course we cannot reverse the tragedy of Holocaust, but we have to keep it in our minds ... in order that the same thing should not happen again."

Members of 296 Squadron Air Training Corps were also in attendance.

The Soviet War Memorial – dedicated to the 27 million Soviet war dead of 1941-1945 – has stood in Geraldine Mary Harmsworth Park since 1999.

“There has never been a more important time to remember the lessons from the Holocaust and reflect on how it helps us understand the impacts of genocide and other atrocities in today's world," says Cllr Pakes.

The Greater London Authority held a ceremony to mark Holocaust Memorial Day in the chamber at City Hall on Thursday. Pupils from the London Nautical School in Stamford Street took part in the event along with Mayor of London Ken Livingstone and members of the London Assembly.