The Mayor of Southwark hosted the borough's Holocaust Memorial Day commemorations at the Imperial War Museum and Geraldine Mary Harmsworth Park on Friday. 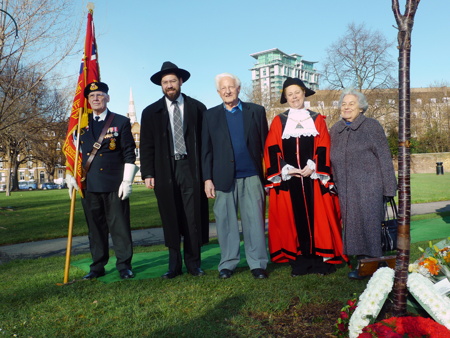 Mrs Schaufeld recalled her experience on one of the Kindertransports that saw over 10,000 Jewish children saved from Nazi persecution and taken to safety in the UK.

"Holocaust Memorial Day is an important opportunity to remember the victims of genocide," said Cllr Lauder.

"I would encourage everyone in Southwark to commit to speaking up and speaking out against prejudice today."

The ceremony was attended by pupils from St Saviour's and St Olave's School and Notre Dame RC Girls' School.

A ceremony was held in Geraldine Mary Harmsworth Park where the borough's Holocaust Memorial Tree was planted a decade ago by the then mayor Cllr Hilary Wines.

The event was organised in partnership with the Soviet Memorial Trust Fund which installed and looks after the Soviet War Memorial in the park.

Speakers at the ceremony included the Russian ambassador Alexander Yakovenko.

"I regret to say that 70 years after the end of this attempt to exterminate an entire nation, antisemitism, racism, xenophobia and extremism continue to plague humanity," said Mr Yakovenko.

"People are discriminated against and even targeted for violence simply because of where they were born or who their ancestors are.

"We can watch it every day occurring in many countries of the world.

"Now more than ever, we must all work to understand other people of different cultures, races, and religions. Mutual respect for differences may lead to the end of hostilities, and only then will the opportunity for world peace exist."

The Liberal Democrat group in Lambeth has apologised after councillors in Waterloo made a "deeply insensitive" comparison between a housing officer and the Nazi regime.

The comments were made in a Bishop's ward newsletter circulated during the same week as Holocaust Memorial Day.

The newsletter described a letter from Lambeth Living asking residents to remove flowerpots from balconies as "more like a diktat from Hitler's bunker than a letter from the housing office".

"Making a comparison of this kind about a housing officer who merely asked residents to keep fire escape routes clear of flowerpots trivialises the suffering and death of millions under the Nazis," he said.

"The Lib Dems owe an apology to everyone they have offended."

That apology was forthcoming on Monday from Liberal Democrat group leader Cllr Ashley Lumsden who said: "We're sorry for any offence caused – I will be discussing this with the local ward team."

• with thanks to Brixton Blog.