"A Budget with no theme and so little that is new" is the verdict of Financial Times business editor John Willman. 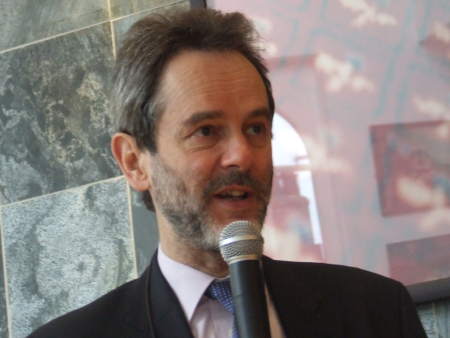 He was speaking at the fifth annual Better Bankside Budget Breakfast Briefing held this year at Roast in Borough Market.

"We have had ten years of Gordon Brown's expansion of the economy," concluded the business editor of the Southwark Bridge-based paper.

"We have been through one of the biggest expansions of the economy. There's been low inflation, strong growth and there's not been a single quarter where Britain's economy has not grown.

"That is probably the best it's ever going to be. We have not made preparation for the bad times. The cupboard is bare."

He said that the Chancellor was assuming that the downturn will be limited. "The Chancellor has got a difficult few years ahead and it is not clear to me that he will not have to put up taxes or cut spending to avoid a crisis."

However, John Willman predicted that there would not be a recession although the rebound might not be as quick as Alistair Darling is hoping. Responses from the floor were mainly upbeat with even a suggestion that the media was encouraging gloomy news.

"I have taken on a new floor and have increased my staff by 25 per cent," said another Better Bankside member Sue Hill of Sue Hill Recruitment. "I have had the best February and March I have ever had."

John Willman was welcomed back for a second year by Kirsty Sewter of Fourth Day PR.