Bankside businesses get the lowdown on Budget from local experts

Representatives of businesses based in the Bankside area gathered at the Jerwood Space on Thursday morning to hear two experts discuss George Osborne's latest Budget statement. 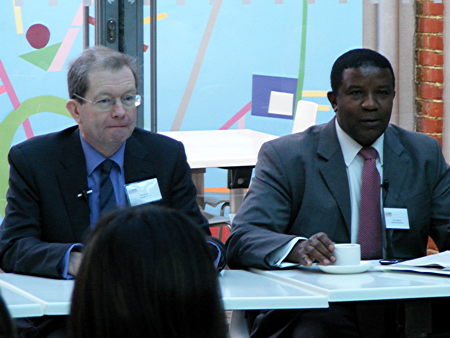 "We need in the UK, after 15 years of debt-fuelled growth which has now come to a juddering halt – to refocus on how you can grow an economy based on increasing productivity, technical change and hard work," he said.

He suggested that changes to stamp duty and capital gains tax could lead to a drop in house prices.

"As an economist I am a bit ambivalent about falling house prices," he said.

"Actually, a fall in house prices could be interpreted as good news because it means they are more affordable.

"It means people can make a move into the areas where they need to, to help those areas get the right kind of skill sets.

"You want areas to be able to have people from management level to nurses and dentists and all the people you require to make a city operate.

"You don't want to price them out of all areas in the way they've done in France, for example, and banish them to the suburbs.

Brian Groom from the FT said: "The budget doesn't do much to change the fundamental economic course ... Osborne has been criticised for the pace of the debt reduction programme ... but the strategy is crucial to retain market confidence and allow Britain to borrow at the cheapest interest rates that we've seen in our history."

Paraphrasing Thursday's FT editorial, he concluded: "Osborne's third Budget, like his first one, was a gamble. This is less of an economic gamble and more of a political wager.

"Our conclusion is that [the Budget] does risk a divisive debate on personal tax rates, but on the other hand the benefits of showing the coalition working together and a coherent policy rewarding work are not to be underestimated."

• A podcast of the event is available from the Better Bankside website.