Housing activists staged a protest outside the London Marriott Hotel at County Hall as Lambeth Council's leader arrived to speak at a £90-a-head breakfast briefing on 'the politics of planning'. 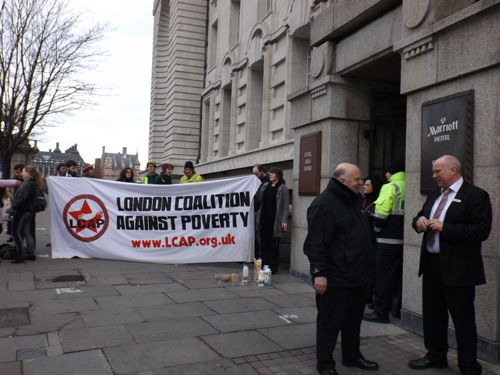 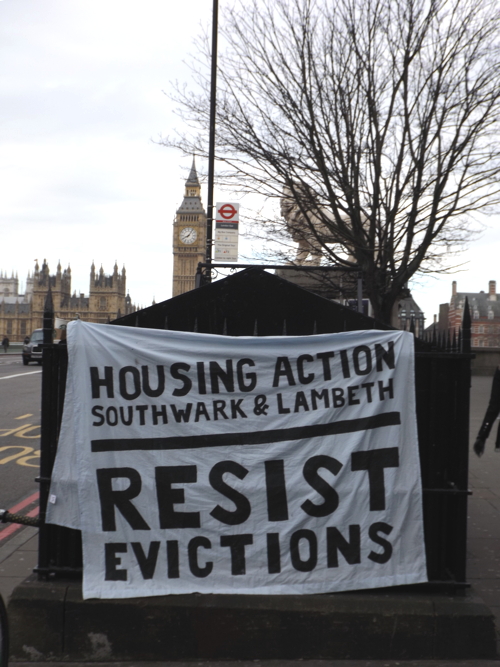 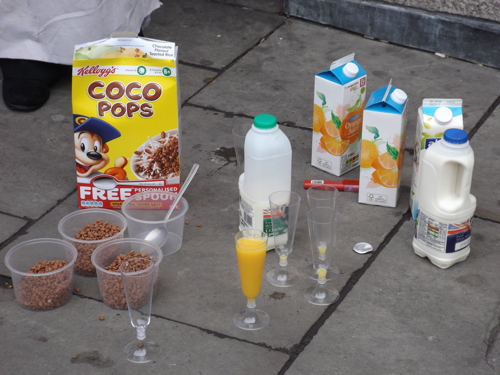 As an alternative to the Ł90 event inside the hotel, campaigners served plastic bowls of Coco Pops on the pavement outside

The gates of the London Marriott Hotel County Hall were closed early on Tuesday morning as security staff checked arrivals against the guest list.

Lambeth council leader Lib Peck arrived, without speaking to protesters, at 7.40am for the 'Politics of Planning round table breakfast' hosted by planning and development communications consultancy SP Broadway.

The demonstration was called by Housing Action for Southwark and Lambeth supported by Lambeth Left Unity who claimed that Marriott hotel staff would have to work fourteen hours to afford the Ł90 breakfast.

The event was fully booked with no last minute tickets available.

"Elitist talks with planning companies exclude the people of Lambeth," claimed the two groups in a joint statement.

"Lambeth is one of the poorest boroughs in the country and the cost will exclude the vast majority of people affected by planning decisions from having a say in their future."

Left Unity's prospective Vauxhall general election candidate Simon Hardy said: "Instead of a cosy breakfast with fat cat developers, Lib Peck should hold a free public meeting with residents and housing campaigners in the borough to discuss the provision of social housing rather than pursuing sweetheart deals with property developers whose only concern is profit at the expense of social provision."

Cllr Peck announced on Twitter last week in response to a Brixton Buzz article that she will be donating her Ł500 fee for speaking at the event to the Mayor of Lambeth's chosen charity Girl Child Network.

Lambeth Council says that the event was a chance for Cllr Peck to discuss the kind of development the authority wants to see in the borough, and also for developers to discuss what they consider to be the local issues.