Boris on Doon Street Tower: "We can do much better than that"

Tory mayoral candidate Boris Johnson has singled out the proposed Doon Street Tower on the South Bank for criticism as he launches his planning and housing manifesto. 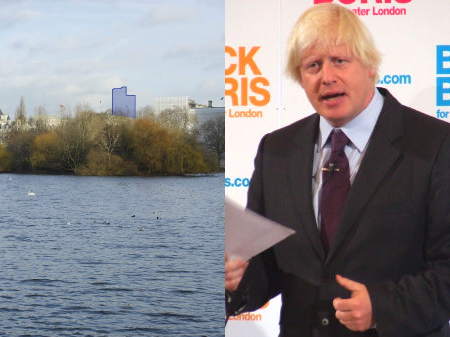 Criticising the record of current Mayor Ken Livingstone, Johnson told LBC radio: "He's constantly waving through developments across London that have no affordable housing in them whatever."

"286 new flats [sic] in Coin Street or whatever and not a single one affordable; waved through by the Mayor. We can do much, much better than that.

The manifesto – entitled Building a Better London [PDF] – singles out the Doon Street Tower which would appear in the protected view towards Horse Guards from the bridge in St James's Park.

A public inquiry into the proposed development – which would include a leisure centre and 329 apartments for market sale – ended earlier this month and the final decision is now in the hands of communities secretary Hazel Blears.

"This area needs a Mayor who will help us preserve our good areas and improve the others," says Shirley Houghton, the Conservative candidate for the Lambeth & Southwark seat on the London Assembly.

"There are currently 22,563 people on housing waiting lists in Lambeth and Southwark, but 7,967 currently stand empty. Add to this the average local house prices – Ł382,688 in Southwark and Ł357,297 in Lambeth – and you see the extent of the problems.

"For a successful approach we need to the see the Mayor of London work with councils like Lambeth and Southwark and I am pleased that Boris is committed to doing so. It is time everyone in this area had a London Mayor who worked with us, not against us."

• Ken Livingstone launched his campaign to win a third mayoral term at the Royal Festival Hall on Tuesday morning.

• Elections for the Mayor of London and London Assembly will be held on Thursday 1 May. Full coverage of the Lambeth & Southwark campaign on this website in the weeks ahead.