A wind turbine, the first of its size to be installed on a London estate, has just finished its initial trial on the roof of Ashenden on the Heygate Estate on New Kent Road. 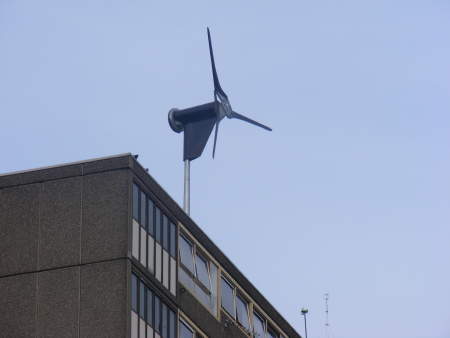 Southwark Council, in partnership with London South Bank University, installed the turbine last June to see how effective it would be in reducing carbon emissions and how renewable energy might feature in the regeneration of Elephant and Castle.

The turbine produced 3,400 kWh of electricity which would otherwise have come from the mains power supply. The output was used to provide lighting in lifts and communal areas of Ashenden.

Southwark Council says that the results from the trial provide invaluable data for developers planning new buildings in the area.

A different type of turbine, the Quiet Revolution QR5 vertical axis machine, will shortly be installed on the roof of Ashenden.

"It's good to see this first type of wind turbine on a London housing estate – it highlights how determined we are about using renewable and low carbon energy most effectively on our housing estates and in our regeneration schemes," says Cllr Paul Noblet, executive member for regeneration.

"It also demonstrates that the council is doing its bit to tackle climate change."

Data gathered during the trial can be viewed on the Elephant & Castle regeneration website.

It was announced last month that the UK's first centre of excellence in low carbon technologies for buildings is to open next year at London South Bank University.

The Centre for Efficient and Renewable Energy in Buildings (CEREB) will be a resource for teaching, research and demonstration of low carbon energy technologies in the built environment.

The Ccentre is the result of a partnership between LSBU, City and Kingston Universities. A funding grant of Ł2 million was received from the Higher Education Funding Council for England (HEFCE) and a further Ł878,500 from the London Development Agency (LDA).

It is being specifically designed as a walk through demonstration facility at roof level on LSBU's new Keyworth II building. There will be facilities available to conduct research and to demonstrate sustainable energy technologies.

The centre will provide a showcase for low carbon energy technologies including photovoltaics, solar thermal, geothermal and wind power.