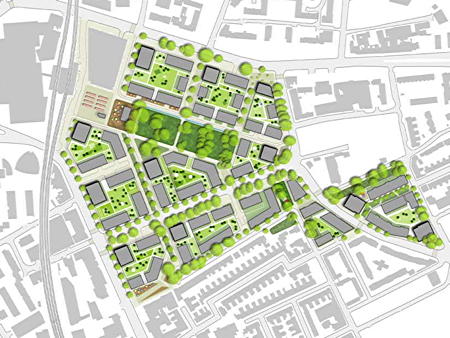 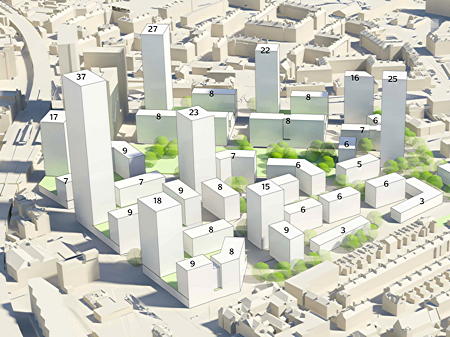 Three months after the first round of consultation on the Australian developer's plans, more detail of the future shape of Elephant & Castle is beginning to emerge.

Earlier this month an exhibition of the 'concept masterplan' for the site currently occupied by the Heygate Estate was held at Lend Lease's consultation hub in Walworth Road.

Slowly a clearer picture of how Lend Lease will achieve its goal of more than doubling the number of homes on the site from 1,0100 to 2,300-2,500 is being revealed. The proposals comprise more than 50 buildings, ranging in height from three to 37 storeys.

What has changed since the July exhibition? The proposed central park has been made bigger and it has been realigned to connect with the marketplace being created as part of the Tribeca Square (formerly Oakmayne Plaza) development. And some (but not all) of the courtyards inside the blocks have been brought down to ground level, rather than being at podium level above a car park.

The developer has also taken account of the campaign to preserve many of the mature trees currently on the site. Deck acknowledges that the summer months have seen the tree canopy looking its best, and Lend Lease is now keen to "capitalise on the site's best assets" by including the mature trees where possible – though the consultation documents are vague about how many trees might be saved.

The future of the tube station and road interchange at the northern roundabout is still an unknown quantity, but at least all the parties are now talking: "We're certainly making progress on that," says Rob Deck. No change is not an option, given the number of additional residents and businesses expected to be attracted to the area.

Although the Heygate Estate itself is in SE17, the postcode boundary runs along New Kent Road and SE1 residents will be keen to know how the redeveloped site will relate to New Kent Road and areas to the north.

The existing slab-like Ashenden block currently separates the rest of the estate from the New Kent Road. "That's a big barrier right now – it's 250 metres or longer," says Rob Deck.

Lend Lease will break the site of Ashenden into three plots, with new thoroughfares created opposite Meadow Row and Falmouth Road.

The current masterplan envisages towers of 27, 22 and 16 storeys along New Kent Road, stepping down in height from west to east and punctuated by smaller 8-storey blocks.

Combined with the Sainsbury's supermarket which will face New Kent Road at Tribeca Square, the nature of this key east-west route is likely to change considerably, with much more activity at street level.

One area where Lend Lease is setting itself up for conflict with Southwark planners is the question of car parking provision. 25 per cent of the 2,500 new homes will have their own parking spaces. Environmental campaigners point out that Elephant & Castle has some of the best public transport connections in London; if any new development can champion car-free city living; surely it is this one?

Rob Deck is unapologetic: most homes will not be provided with parking spaces, and he points out that the existing Heygate Estate is provided with 700 car parking spaces for 1100 homes in "garages that dominate the public realm". He argues that some parking provision is essential for those with disabilities, as well as those who require vehicles for their work.

Another oft-expressed criticism of Lend Lease's latest plans is the amount of green space that will be accessible only to residents.

"I wouldn't say it's a gated community – that's taking it a bit far," says Rob Deck.

"People need access to different types of amenity space. Over 50 per cent of the site is public realm."

He makes the case that these communal (but non-public) spaces are important for increasing neighbourliness within a particular block: "That community needs a space they can share," he tells me.

It will be some time before more detailed plans for each set of buildings come forward. Lend Lease expects to obtain outline planning permission next year before it appoints architects to design the individual components of the masterplan.

The latest exhibition also includes some preliminary ideas for interim uses of parts of the Heygate Estate while the development is in progress.

These initial ideas – including a construction training facility, a community garden and a cluster of shops in recycled shipping containers – are concentrated on the southern half of the estate.

Does that mean that the parts of the estate nearest New Kent Road will remain boarded up and out of bounds for the next decade or more? Rob Deck explains that the initial emphasis is on interim uses on the southern half of the estate as these will be the first parts to be demolished. The company will consider further ideas for temporary activities elsewhere as the scheme progresses.

"I look forward to plans for the new housing starting to take shape."

In mid-November Southwark Council will publish its draft supplementary planning document (SPD) for Elephant & Castle, marking the start of a fresh round of consultation on the planning policy that will set the rules for the next phase of the Elephant's development.

• The display panels from the latest exhibition can be viewed online.