A plaque has been installed at Metro Central Heights on New Kent Road to commemorate the Trocadero and Odeon cinemas which formerly occupied part of the site. 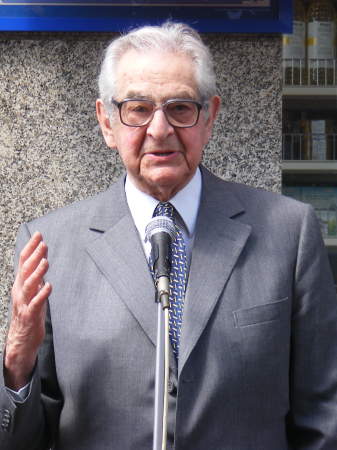 Denis Norden speaking at the ceremony 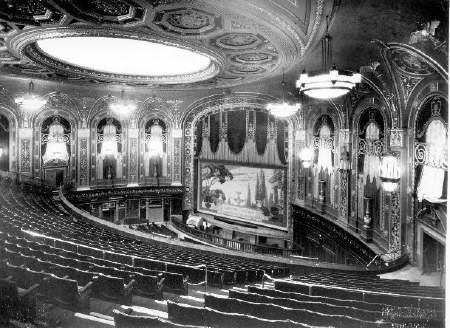 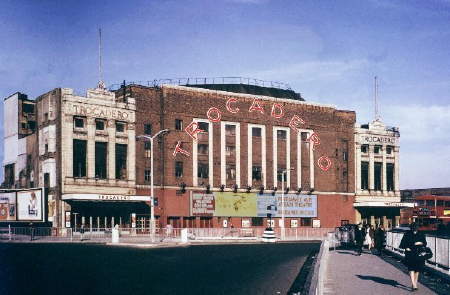 The Troc shortly before demolition in 1963 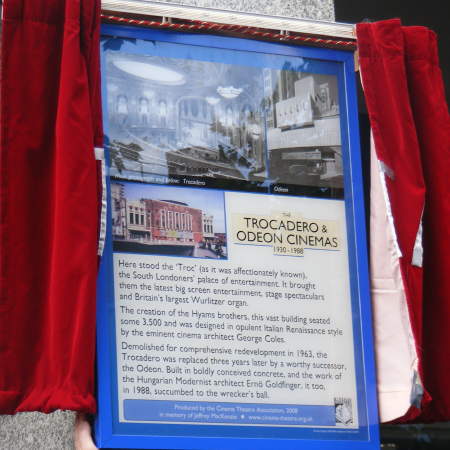 The 3,500-seater Trocadero stood at the western end of New Kent Road from 1930 to 1963. Designed by George Coles in ornate Italian renaissance style, it was a major centre of screen and stage entertainment for many years.

After the demolition of the Trocadero a smaller cinema designed by Erno Goldfinger, the Odeon, was built on part of the site. It was demolished in 1988 and its place has now been taken by the new Vantage tower at Metro Central Heights.

The plaque, installed by the Cinema Theatre Association, was unveiled on Wednesday by comedy writer and TV presenter Denis Norden.

Norden worked at the Trocadero cinema as assistant manager for several months in 1940 and he delighted the crowd gathered for the unveiling with a series of anecdotes.

"We always kept at least 400 seats at sixpence and come 6 o'clock there would generally be a queue of 400 down the New Kent Road waiting to get in at the next performance.

"Indeed it was always said that when the bomb fell on Spurgeon's Tabernacle it blew one side of the Rockingham [Arms] down, it replaced two reels of the film in the projection room, but we never lost one queue-er in the sixpennies.

"For sixpence you got not only two feature films and a stage show, you got the cinema organ interlude, you got a cartoon, a newsreel, an interest short, and of course the trailers.

"That's why we never lost a sixpenny seat and why the Hyams Brothers justly earnt the name 'last of the great showmen'."

Norden went on to recall the time that the Troc hosted a full circus. "I'll never forget on the Sunday night previous the elephants coming up the Old Kent Road," he said.

"We couldn't find anywhere for the three lions that were part of the show. In the end – out of desperation – they were put in a big cage right at the back of the stage up against the rear wall.

"As it happened, that week we had an MGM film. So every time Leo the MGM lion appeared on the screen and roared, he was answered by a trio backstage. They earned a round of applause from the audience every time."

David Trevor-Jones, chairman of the Cinema Theatre Association, spoke about the key role played by cinemas as community centres during the middle of the 20th century.

"There are certainly older people walking around in that shopping centre over there – and possibly in this little crowd – who, if you stopped and asked them about the Trocadero, would stop and dreamily smile and recall a happy memory. Maybe an auntie who worked in the sweet shop, maybe bunking in via the back entrance for a Saturday matinee, maybe a lovers' tryst.

"What they are likely to remember is an experience of the building, not the film, and that's what the CTA is interested in, and that's why we've started to commemorate some of the most important parts of our lost cinema heritage with plaques.

"We hope that they will keep alive those community memories, perhaps sparking personal memories too, among passers-by who glance up and remember a family's relationship with the Trocadero here at the Elephant & Castle."

The Trocadero's fine Wurlitzer organ was saved by the Cinema Organ Society and later reinstalled at London South Bank University's Edric Hall on Borough Road. Currently in storage, it is now likely to find a new home at the Victoria Hall in Ealing.

Do you remember the Troc and the Odeon? Share your memories in our forum