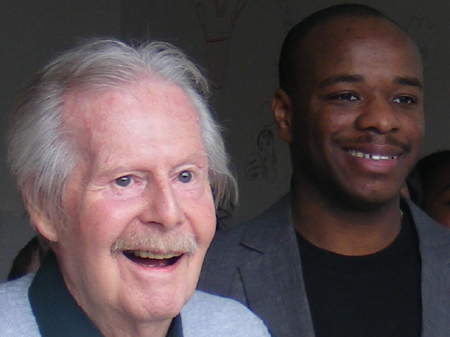 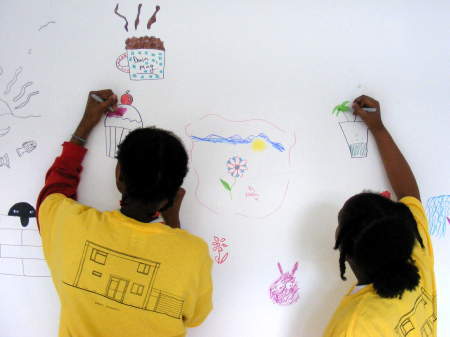 Cathedral School pupils decorate a wall in the Art House 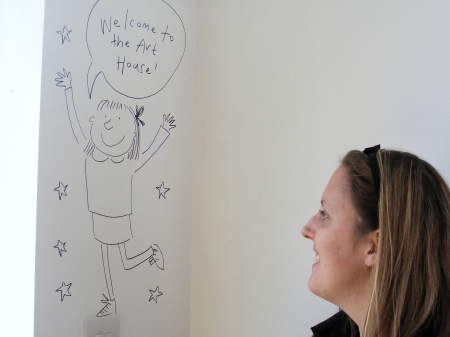 The primary school in Redcross Way has developed its former schoolkeeper's house into a studio and public art gallery.

Children will access the studio for lessons and show work in the gallery but the physical separation from the school will allow the house to also operate within the art world with commissions and shows featuring contemporary artists. For the opening week Richard Woods has loaned 'Red Brick Tiles no 3' to be installed in an upstairs room and brought direct from the Basel 39 show in Switzerland.

Stephen Wiltshire, who drew Southwark Cathedral last February and described himself as "a city boy who liked drawing cityscapes," spoke about his visits to American cities.

Headteacher Sylvia Morris, welcoming Tony Hart, said that although he was well-known to parents he had become known to children who were watching re-runs of his popular television programmes.

She described the project as a "gallery that enters into the world of community" and predicted that the power of Art House would be "never ending, exciting, risky and inviting".

Recalling Picasso's suggestion that every child was an artist but the problem was how to remain one, she declared: "We think what we are doing is a unique interface between contemporary artists and the local community."

The project has been funded by Cathedral School, its governors, the school's PTA and the Newcomen Collett Foundation.

Adding a drawing and message to an art wall were former BBC Radio 2 presenter Roger Royle who has known the school for many years, cartoonist Rosie Brooks who lives nearby and artist Dilek O'Keeffe who has welcomed Cathedral pupils to her a temporary glass space in Southwark Street.