The "sculptural pavilion" in the centre of Empire Square in the Borough has been put up for sale for just under £1 million. 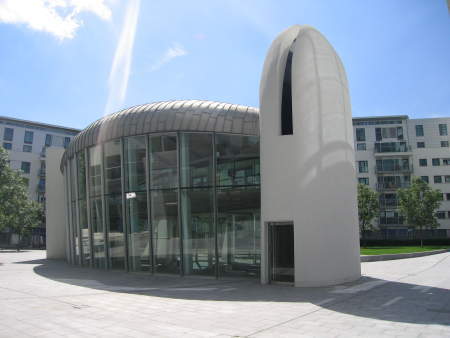 Berkeley Homes has been unable to find a taker for the unusual building in the centre of Empire Square (formerly known as Tabard Square) which was intended for food and drink use.

Now the property developer has instructed E A Shaw, with joint agent Cowan & Rutter, to sell the virtual freehold of The Pavilion.

The two-storey building – designed by Rolfe Judd architects – offers approximately 3,877 sq ft of gross internal space. The building is on the market for Ł995,000 for a 999 year lease.

"This is a stunning and unique building in a great location which we envisage will attract companies and organisation seeking to own a exclusive property in a vibrant area," says Rupert Cowling of E A Shaw.

The Pavilion was built with planning permission for retail or restaurant use, but Berkeley Homes recently submitted a planning application to widen the permitted uses to include financial & professional services and other types of office use.

To support the planning application Berkeley Homes submitted a Online/Documents/20335_1.pdf">letter from agents CB Richard Ellis explaining that "there are a number of key issues which have been overlooked" in the Pavilion's design rendering it unsuitable for restaurant use.

CBRE cited failings such as a lack of space for kitchens, waste bins and toilets.

"The compromised space and secluded nature of the building has meant that this opportunity has been rejected by a large number of ... operators in favour of more visible locations..." concluded the letter.

In its marketing material for the development Berkeley Homes promised that the communal gardens and pavilion "will become the hub of the community".

"As the central focus to the square, the pavilion is not so much a building but more a piece of functional sculpture," gushed a 2005 press pack. "With its unusual mix of curved white rendered walls, expanses of glazing and a striking metallic roof, the structures of the pavilion create an organic architectural centrepiece to the design."