Poet Laureate Andrew Motion read the words of John Gower during a 600th anniversary commemoration at Southwark Cathedral on Monday. 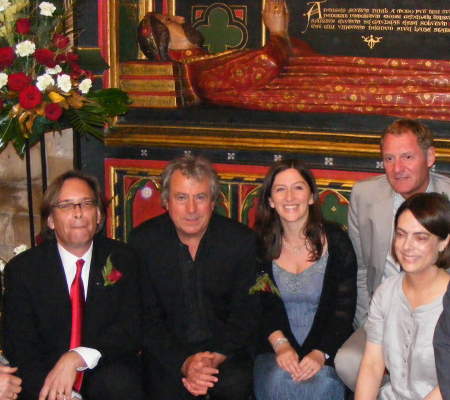 John Gower, a friend of fellow poet Geoffrey Chaucer, lived at the monastery now known as Southwark Cathedral where he died in 1408. Today at the cathedral church he lies in effigy with his head resting on his books. The magnificent tomb, which he designed himself, was seen by William Shakespeare who was inspired by the books and included Gower as a character in three plays.

Red roses were worn by clergy and many members of the congregation attending a special choral evensong. The Dean sprinkled and censed Gower's tomb, which was decorated with red roses and flanked by candles, as the choir sang In Paradisum.

Ardis Butterfield, from University College London, read in French Gower's poem about St Valentine which may have been prompted by Chaucer. David Carlson, of the University of Ottawa, read Gower's Latin prayer for 'peace, love and understanding'.

Among the large congregation, which included many Americans, were delegates from the International John Gower Society Conference meeting at Queen Mary, University of London.

Earlier Martha Carlin of the University of Wisconsin Milwaukee, author of Medieval Southwark, led a walking tour of the Borough. She also addressed the conference on 'Putting Dinner on the Table in Gower's London'.

The souvenir service booklet included a reproduction of John Gower's will leaving 13 shillings and 4 pence to both St George the Martyr Church in Borough High Street and St Mary Magdalen Church in Bermondsey Street. St Thomas' Hospital received 40 shillings. His young wife was left 200 pounds and all the furniture in their priory apartment within today's cathedral precinct.