The new Brisket Restaurant in the former Bankside Restaurant space reopens this week after a burst water main caused temporary closure just a few weeks after its launch. 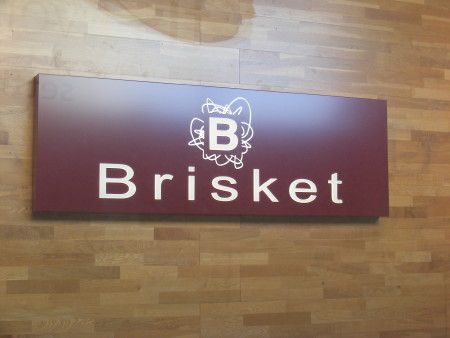 Kelvin Macdonald's 150-seat basement restaurant, on the corner of Southwark Bridge Road and Sumner Street, was planned in the 1990s and first opened in 2000 as Bankside when the area was hardly fashionable. Over eight years it became noted for good food and reasonable prices. For a time there was even a branch in the City.

The surprise closure earlier this year of the flagship Bankside in SE1 had as much to do with Kelvin's skiing accident as his new ideas. Last January he was very seriously injured whilst competing with the Honourable Artillery Company team. After having to spend several months recovering he found himself wanting to focus on Bankside by keeping what worked and changing what he knew could be improved.

During the long summer closure Kelvin put in a new floor and a new marble counter. There are now flexible alcoves for small groups. The toilets have been improved whilst also reducing water usage.

With the emphasis on fresh, wholesome and sustainable British food, he has been looking to nearby Borough Market. 'Brisket' is an old English dish which turns out to be suddenly in tune with the public's growing interest in simple traditional food.

This 'signature' dish is made from one of the least well known cuts of beef, Brisket, which is marinated in Guinness for 24 hours and then home-smoked and roasted for eight hours. The meat is being supplied Farmer Sharp who gave the restaurant staff a lecture on his Lake District organic meat prior to the opening.

Another speciality is Stargazy pie -a traditional boneless Cornish fish pie where the heads poke through the crust as if gazing skyward.

Managing director Kelvin Macdonald has been in the restaurant industry for over twenty years during which he has cooked for two Chancellors, Kenneth Clarke and Gordon Brown. He also knows the kitchen at next door 10 Downing Street, Admiralty House and Dorney Wood. John Prescott is just one of the former ministers who has come to SE1 to eat at Kelvin's restaurant.

But Kelvin insists that his relaunched restaurant must be anchored in the area not just by forging more links with Borough Market but by attracting diners from among SE1 business people and residents. Brisket, like Bankside, is continuing a policy of supporting local charities through fund-raising and sponsorship.