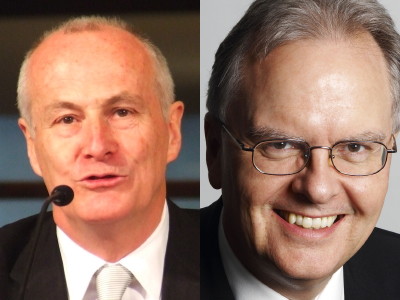 Michael Lynch (left) will be succeeded by Alan Bishop

Bishop, 55, currently runs the Government's communications operation based in Hercules Road near Lambeth North Station and is a former chairman of Saatchi & Saatchi International. He will join the Southbank Centre in the New Year for a handover period.

Current chief executive Michael Lynch originally announced his intention to step down just over a year ago.

Bishop will take over responsibility for the Royal Festival Hall, The Hayward and the Queen Elizabeth Hall which together employ 435 staff with an annual turnover of nearly £40 million.

"He is the right man for the job and someone who has the skills to lead the organisation through its next major stage of development, looking towards the Olympics and beyond," says Rick Haythornthwaite, chairman of the South Bank Board.

"Not only has he considerable experience of managing large, complex organisations, both in the public and private sectors, but he also has tremendous clarity of thought and focus, and an understanding of the needs of creative thinkers and practitioners.

"I would like to pay tribute to outgoing chief executive Michael Lynch who will be with us until April 2009 to ensure a smooth hand-over of the many responsibilities of the CEO's role. Much has been achieved under Michael's leadership, including the enormously successful reopening of the Royal Festival Hall and the acclaimed transformation of the Southbank Centre site."