This summer 54 teenagers from Lambeth and Southwark are working as curators, producers and creators in 20 of SE1's cultural organisations. 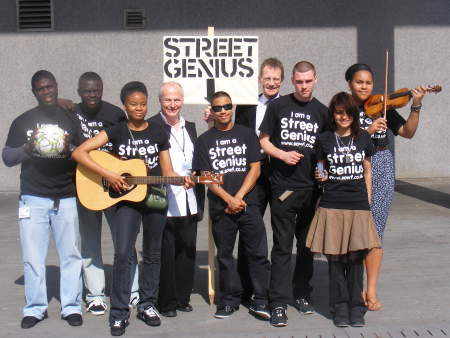 The Street Genius scheme is coordinated by SOWF (Some Other Way Forward) which is a Treasury-funded initiative to ensure that young people in Southwark and Lambeth benefit from the presence of the arts institutions along the South Bank and Bankside.

The 54 'Street Geniuses' are all aged between 16 and 19 and have been recruited via local youth groups. Their placements with cultural organisations are taking place between March and December.

Several 'Geniuses' are involved in events connected to The Mayor's Thames Festival and a showcase of the young people's work will be presented as part of the launch weekend of the Cultural Olympiad at the end of September.

Aminat, Amy, Andreas, Reuben and Francesca are shadowing staff at the Young Vic working on the Festa! community show that will bring Brazilian dance and drama to The Cut in mid-August.

Jelani – working with South Bank Employers' Group – has produced a young people's guide to the organisations belonging to the South Bank and Bankside Cultural Quarter.

Charlie and Nyia are working with the Siobhan Davies Dance Company to produce a dance event for this year's Elefest to be held in September.

Completed Street Genius projects include a dance event at the temporary Southwark Lido produced by Belinda, Kimber and Shay as part of the London Festival of Architecture.

"Three years ago all the arts organisations in the area came together realising that if they worked together they could achieve a lot more," explains Sir Nicholas Serota, director of Tate and co-chair of the Cultural Quarter group.

"We managed to get some money out of the Treasury – which is unheard of for South London – and created this project which has resulted in the Street Geniuses.

Sir Nicholas hopes that the scheme will encourage local young people to seek careers in the arts and culture.

Michael Lynch, chief executive of Southbank Centre, says that the Street Genius programme will pave the way for south London youths to play a key role in the artistic activity associated with the London 2012 Olympics.

"I really hate the idea that all the news stories about 16 to 19-year-olds are sad or bad stories, so I see this as an incredibly positive step," he says.

He adds that the South Bank and Bankside will be "an extraordinary Mecca for entertainment and fun during the Olympic period".