Jack Hames, teacher and founder of Copyprints, has died after three months' illness. He was 88. 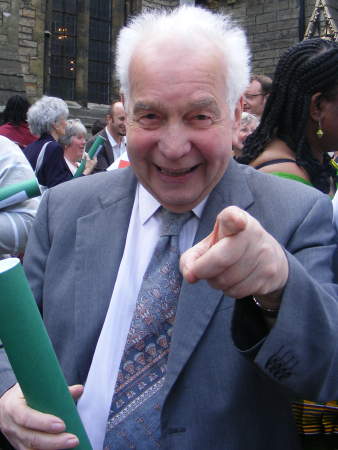 Jack Hames pictured in 2008 at the Southwark Civic Awards

Yorkshire-born Jack Hames lived for over fifty years in The Borough where he became a well-known figure. He was a member of the St George the Martyr congregation for 56 years and was responsible for painting the church's huge posters on the outside south wall designed to catch the attention of passers-by.

He arrived at St George's as a teacher at its school which was near St George's Circus. He soon became its popular headmaster.

In 1959, whilst still working in education, he founded Copyprints Business Centre in Talbot Yard off Borough High Street to produce maths games and activity material as part of his Excitement in Learning project. His first publication was Number Patterns in 1969 and this was followed by a series of mathematics work books. In 1982 he began publishing sets of worksheets on numerous topics.

He had an ability to tell stories to any group young and old including his grandchildren. He was often invited by fellow head teachers in the area to take an assembly at their school.

He was so much in demand for his advanced teaching ideas that he was persuaded to spend a year at Aberdeen producing a report for the Independent Television Authority on the use of television in schools. His report, being truly independent and forthright, was not popular. But Jack saw that it was published as a book in 1974.

Earlier he spent a summer in Bermuda running a maths course. On the strength of one maths lecture he was invited to the University of Prince Edward Island, an arts and science institution committed to encouraging and fostering critical, creative, and independent thinking. As a headteacher in post he could only spare a term away from Southwark although the Canadians wanted him to stay for a year.

His last school appointment was in Greenwich where he was Head of St Alfege with St Peter Primary School. His numerous other activities included being secretary of the Southwark Swimming Association and working for the Surrey Dispensary and St George's Charity.

A great interest in crime and how the criminal mind worked together with a good knowledge of the capital's history always made him an interesting companion on a walk around London.

Meanwhile Copyprints was soon serving the printing requirements of many large institutions such as the railways, the Adoption Society and Southwark Cathedral as well as Guy's medical students desperate to print out a thesis or a party poster. The Pre-School Playgroup Association magazine was not only printed but developed over 15 years at Copyprints by Jack and his wife Jane.

When the listings magazine 'in SE1' was founded in 1998, Jack was an immediate supporter offering advice and encouragement. The magazine has been printed at Copyprints ever since the second issue.

He was always aware that his business in Talbot Yard occupied an historic site. Talbot is a corruption of Tabard and it was from the Tabard Inn that Geoffrey Chaucer set out on his pilgrimage to Canterbury. The inn features in The Canterbury Tales' prologue. In 2003 Jack was delighted when the building was awarded a blue plaque which was unveiled by Terry Jones of Monty Python fame.

On that occasion Jack naturally hosted a reception. He knew how to 'work a room' and rarely had a moment to speak to his wife during a party. He was noted for holding an annual Beaujolais Breakfast each October. His own 80th birthday in 2000 was a generous celebration for his wide circle of friends held at the top of the Guy's Tower.

Jack had seen huge changes not only in technology at Copyprints but in Southwark. On his 80th birthday Canon Helen Cunliffe of Southwark Cathedral described Jack as "having an open mind to change". She also said that he was valued in the community for the distinctive way in which he combined a deep love for the area with an acute business sense and an open mind.

At this time he was still going to the gym in St Thomas' Street and continued to do so until he was 82.

It was his custom for many years to attend choral evensong once or twice a week at Southwark Cathedral. He would often start Advent by going to Salisbury Cathedral.

Jack understood and loved the rhythm of the liturgical year. After his teacher training in 1948-9 at Marjon (University College Plymouth St Mark & St John) he spent a year studying theology at St Luke's College in Exeter. Over the following decades his warm welcome to any visitor at St George's often resulted in the person staying to become a member of the congregation.

When bereavement was experienced by any friend Jack gave time and thought to words of comfort on paper. He remained sure of his own destination at death.

The trip to the Salisbury Advent Procession service was always taken with his wife Jane. She was a nurse at Guy's when they met at a dance organised by Jack in the church hall. They married at St George's in the summer of 1956.

Their home was in Mint Street where Jack enjoyed seeing the view of a factory, a garage and a slum building transformed into Mint Street Park. Jack leaves Jane, three daughters and nine grandchildren.

In May last year Jack received a Lifetime Achievement Award at the Southwark Civic Awards ceremony. It was presented "...in recognition of Mr Hames' service to the community as a teacher and headmaster at St George's School, his dedication to St George the Martyr church and his kind and generous acts for people and charities in Southwark".

• The funeral of Jack Hames will be at St George the Martyr Church in Borough High Street on Monday 26 January at 12 noon.