10 years of Southwark’s memorial to the Soviet war dead

Veterans minister Kevan Jones MP was among the speakers at a Victory Day act of commemoration in Geraldine Mary Harmsworth Park on Saturday that also marked the 10th anniversary of the unveiling of the Soviet War Memorial. 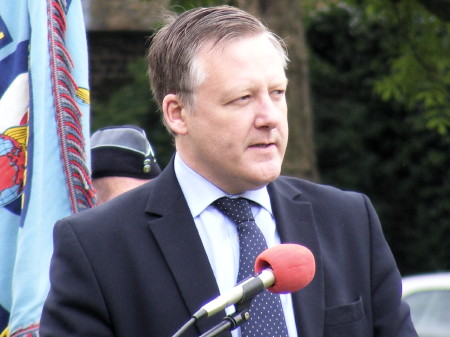 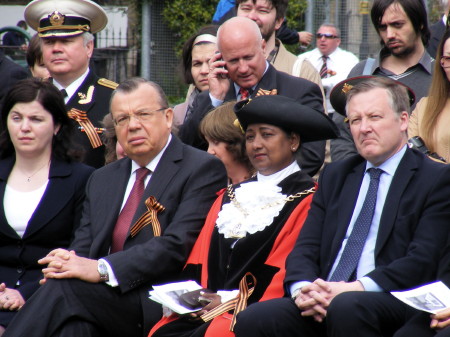 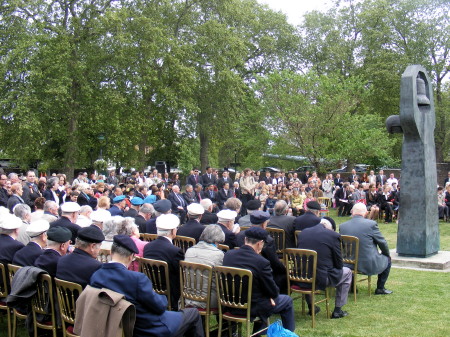 Veterans, guests and members of the public assembled at the Soviet War Memorial

In May 1999 the Soviet War Memorial was unveiled in Geraldine Mary Harmsworth Park by the then defence secretary George [now Lord] Robertson in the presence of the Duke of Kent.

Since then the Soviet Memorial Trust Fund has held ceremonies in the park each year on Holocaust Memorial Day in January, Victory Day in May and Remembrance Day in November.

"Can I say on behalf of the British Government how honoured I am to be here today to recognise the unimaginable sacrifice which the peoples of the former Soviet Union made to defeat fascism in the Second World War," said Kevan Jones MP, the minister at the Ministry of Defence with responsibility for veterans.

In his speech Simon Hughes MP described the annual Victory Day ceremony as "one of the most important events we have in our borough".

He added: "It reminds us that in our moments of need the creed and the colour and the language of those who come to our aid don't matter.

"That in our moment of need there is a common humanity that calls us to help our sisters and our brothers – and many people have done that even unto death."

Mr Hughes asked participants in the ceremony to pray for peace in Pakistan, Afghanistan and Sri Lanka.

Speeches were also made by the Mayor of Southwark Cllr Eliza Mann, Bob Wareing MP and Russian ambassador HE Yury Fedotov.

All the speakers laid wreaths at the memorial along with representatives of many other national and local organisations. Cllr Peter John represented Southwark's Labour group.

Pupils from the Russian Embassy School in London also took part in the ceremony.

After a two-minute silence the Russian ambassador invited all participants to join him in raising a toast "to victory".

Event on board HMS Belfast

The Russian and British anthems were followed by a gun salute from the HMS Belfast's 4-inch guns.

Organiser Eugene Kasevin said the event would "highlight once again the strong cultural ties between the two great nations and will reinforce the prevailing respect of our generation to our ancestors who gave their lives to defeat the oppressors".