Four teams of local rowers took part in a charity race on rowing machines at the Shell Centre podium on Tuesday morning. Jenny Agutter, patron of the Ovacome charity, was on hand to start the race. 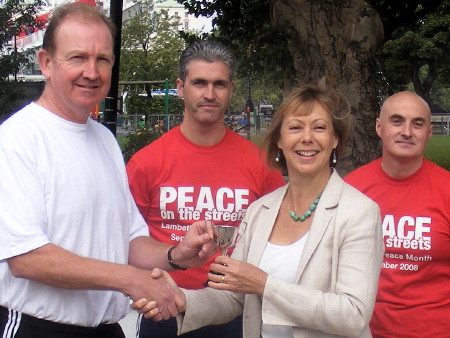 The four teams were from the Metropolitan Police, the Waterloo Quarter Business Improvement District, The Wellington pub and The Fire Station bar.

The race was organised by PC Neil Haggertay who said: "The idea was to have a fun event for local people and business to get involved in while raising money for charity. It turned out to be exactly that and a bit more."

The distance raced was 6.8 km to match the Putney to Mortlake course of the annual Oxford and Cambridge Varsity Boat Race.

The first race was won by the Lambeth Police team with a time of 25 minutes and 2 seconds followed closely by the Waterloo Quarter team who took 25 minutes and 18 seconds.

In the second race The Fire Station team was over 200 metres ahead at the half-way point but a combination of stamina and good fortune helped The Wellington team close the gap to take the lead and win by 15 metres.

The event raised about Ł3,000 for ovarian cancer charity Ovacome.