Full steam ahead for The Railway Children at Waterloo International

Lambeth Council gave the go-ahead for the theatre production of The Railway Children at Waterloo International just four clear days before the first night. 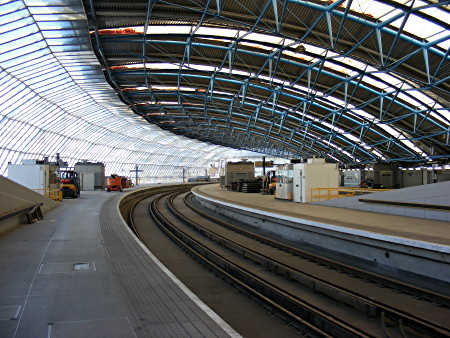 The town hall clock was striking 11pm on Tuesday night as planning applications committee chair Diana Morris moved that permission be given for the temporary use of the disused platforms as a theatre.

Matthew Gale for Centreline Productions and producer Jenny King had waited three hours forty minutes to be called before the committee's first meeting following the council elections in May.

"Why have we got a planning application days before the event?" asked Cllr Brian Palmer who has expressed concern about the late application by the Udderbelly earlier this year. The planning officer said that there had been advance contact with the council but the applicant had wished to secure other required permissions first.

The temporary theatre will seat an audience of 976 on two sides of a railway track where a steam engine will make an appearance.

The committee's twenty minute debate on the application focussed on audience access from Mepham Street next to Victory Arch and any possible crowding of the pavement.

Cllr Palmer also questioned the need for the temporary bars within the site to remain open "in excess of theatre opening times". Matthew Gale said that the agreement with the railway authorities required the theatre to close each night by 11pm.

Matthew Gale stressed that the company was committed to the Waterloo area by providing local employment, hosting school at workshops and offering concessionary tickets for resdents.

Former Lambeth resident Jenny Agutter, star of the 1970 film production of E Nesbit's book, will be attending the show on Thursday 8 July.

The long-term future of Waterloo International, which was last used by Eurostar trains in November 2007, is still uncertain.

The station is owned by BRB (Residuary) which, together with Network Rail and Lambeth Council, has published a statement of planning principles for the redevelopment of the Nicholas Grimshaw-designed building.

Any plan is likely to involve the construction of a bridge across the 'orchestra pit' sunken concourse to allow level access between the former Eurostar platforms and the rest of Waterloo Station.

The area below the platforms is expected to be converted into shops and leisure facilities, with a large supermarket among the possibilities.

• The Railway Children is at Waterloo International from Sunday 4 July.