Work began this week to strengthen the foundations of the Turbine Hall at Tate Modern in preparation for further enabling works for the gallery's extension in the New Year. 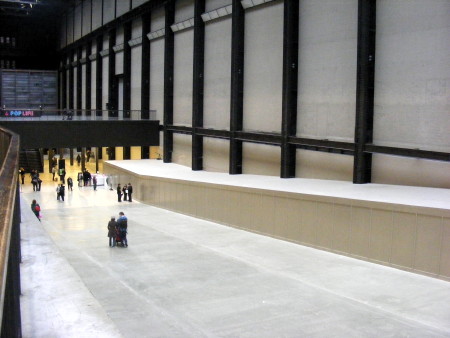 Tate says that this initial phase of piling works will strengthen the existing Turbine Hall foundations in order to help support the new building which will be constructed to the south of Tate Modern.

Tate has appointed trade contractor Cantillon to work with the construction manager Mace to deliver this programme of work. Works started at the end of September to build the hoarding around the site.

While Tate Modern maintains business as usual, Cantillon will install 185 piles into the ground under the Turbine Hall wall to a depth of 25 metres.

The eastern end of the Turbine Hall is currently hosting Miroslaw Balka's How It Is installation.

In September Tate chairman Lord Browne told journalists that he is "highly confident" about the funding prospects for Tate Modern's expansion plans. The extension – designed by Herzog and de Meuron- was approved by Southwark Council in March.

Last month the Government restated its commitment to provide £50 million towards the cost of the extension after reports in summer prompted fears that the funding could be cut.

In September Tate received planning permission to erect a sample section of the facade of the gallery extension in the yard of the Tate stores at Mandela Way in Bermondsey.