A bike repair shop in Hatfields has launched a new pick-up service aimed at busy commuters and residents. 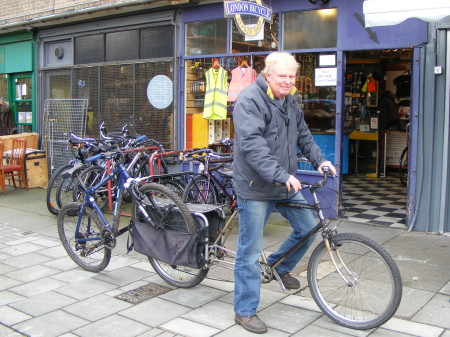 Robert Graham, owner of The London Bicycle Repair Shop, said that the service will benefit people who may not have time to get their bike repaired or serviced.

"Everyone's short of time first thing in the morning. We'll come and pick the bike up and deliver it back to them before they finish work at the end of the day," says Robert. "Or if they've got more time they can come down to the repair shop and pick it up."

With record numbers of Londoners taking to their bikes, the need for regular bike maintenance is becoming more apparent and Robert hopes the convenience of his same-day service will encourage cyclists to love their bike.

"People should try and get their bikes in for some TLC rather than just keep on pedalling until they've completely broken their bikes and have to put them on the scrapheap," he says.

Cyclists who use the pick-up service will also benefit from their bike being repaired in a specialist workshop, which Robert believes is superior to the service offered by mobile operators who repair bikes at the customer's home or workplace. "We do all the repairs in the workshop so we don't skip anything if we haven't got the right equipment to hand."

The pick-up service covers a two kilometre radius from the shop and they have even created a specially modified bike, nicknamed "The Cow", to collect bikes for repair. Pick-up and delivery starts from £10 and a service costs £44.

The zone covered by the pick-up service stretches from St James's Park in the west to Tower Bridge Road in the east and Clerkenwell in the north to Kennington Cross in the south.

The popularity of cycling in the capital is set to increase even further this summer when Mayor of London Boris Johnson lauches his public bicycle sharing scheme.

The scheme is designed for short journeys in and around central London and Robert, who also owns a bike hire company at Gabriel's Wharf, hopes the scheme will be a success but does have some reservations. "I hoping it will be positive," he says. "A lot of people don't have the space for a bike and we have some regular hirers because of this."

"But a lot of people who hire a bike want it longer than a quick journey, they want to stop in the pub or continue on to Greenwich," says Robert.

Prices for the Mayor's scheme were announced at the end of last year and TfL suggests that users will be better off using existing cycle hire businesses if they need a bike for more than a couple of hours, which is good news for local businesses like Robert's.