Simon Hughes MP has unveiled his new vehicles for the Liberal Democrat general election campaign in Bermondsey and Old Southwark: a taxi fuelled with biodiesel and a folding bicycle. 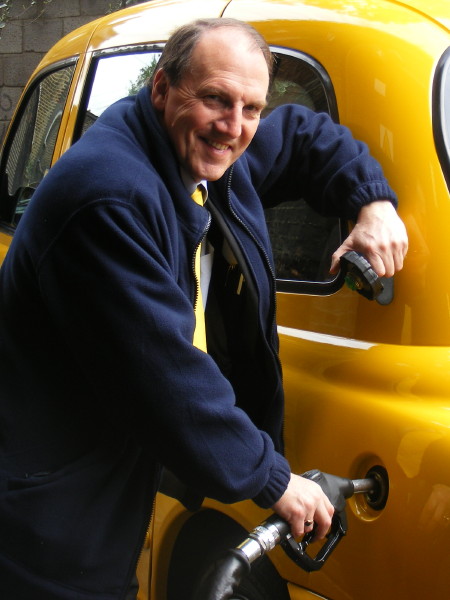 The MP has for many years driven around in a former London taxi painted in his party colours.

His last vehicle has been off the road for a couple of years, but for the general election campaign he has bought an LTI TXII taxi which is fuelled with locally sourced biodiesel produced from waste vegetable oil.

On Wednesday Simon refilled the taxi at Uptown Oil, the local biodiesel producer based in a railway arch just off King James Street.

Uptown Oil collects used cooking oil from London restaurants and recycles it into green biofuel at its SE1 premises. Uptown sells most of its fuel to London taxi drivers. Since the start of the year it has also been supplying the London Borough of Richmond upon Thames.

Simon Hughes bought his new taxi from the Ascott Cab Company of Deptford, who were formerly based in Druid Street.

And, to replace his bicycle that was stolen a few months ago, the MP has acquired a yellow Brompton folding bicycle from On Your Bike in Tooley Street.

Simon Hughes is the Liberal Democrats' shadow climate change secretary. He has pledged to move to a new energy-efficient home in the constituency if he is reelected on 6 May.