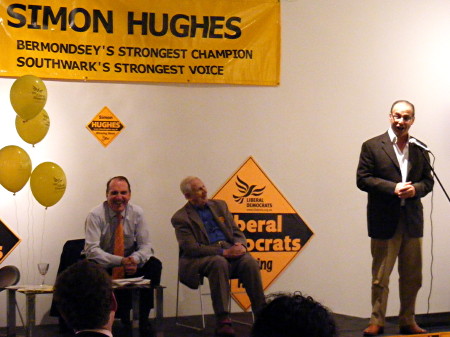 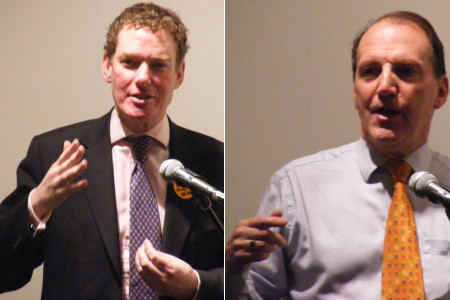 Simon Hughes, who has represented North Southwark and Bermondsey in Parliament since 1983, has set out his pledges which he hopes will secure his reelection in the renamed Bermondsey and Old Southwark constituency.

The MP was joined on stage at the London College of Communication by Theo Paphitis who declared himself "apolitical" and cynical about politics but "honoured" to endorse Simon Hughes.

"If you could replicate Simon Hughes across the country, there would be be a Lib Dem government just like that," said Theo Paphitis.

He told the audience of Lib Dem activists and supporters that Southwark is very close to his heart and that he had been able to buy his first home thanks to a loan from Southwark Council.

He added: "If there were more Simons in the House of Commons I believe that this country would be a much better place."

He poured scorn on Labour's proposals for joint working with Lambeth Council: "Anyone who has represented Newington ward, Village ward, East Dulwich ward or Cathedrals Ward – any ward that has the misfortune to border Lambeth – knows that everyone in Lambeth complains that the services aren't as good as the services people in Southwark are getting," said Cllr Stanton.

London Assembly member Cllr Caroline Pidgeon spoke about the Conservatives' record at City Hall and called on her colleagues to work to gain overall control of Southwark. "I'm fed up of having a Tory running housing in this borough," she said, referring to the joint administration that the Lib Dems and Conservatives have shared since 2006.

In his speech Simon Hughes set out his top 12 local commitments for his election campaign. As a member of parliament he has no executive power, so most of his commitments involve lobbying Southwark Council, Transport for London or the NHS to deliver change.

1. Health
"Work to open a 24-hour GP service based at Guy's to follow the success in winning a new 24-hour service for people with mental illness at King's A&E."

2. Housing
"Change the law to allow planning gain money to be used for building and repairing local homes, to allow councils to borrow at the lowest commercial rate, and councils to refinance historic debts incurred building local council housing."

4. Transport
"Campaign for more frequent or bigger buses for the C10 route, or for the route to be split into two shorter routes; for improved bus services for the 381 and to prevent simultaneous closure of the Jubilee and Northern line stations in the borough."

5. Jobs and the river
"Negotiate with the GLA, the Port of London Authority and local councils to provide a local site for boat building and repair, giving jobs and apprenticeships to Southwark residents."

7. Young people
"Work with the council and voluntary organisations to make sure that there is at least one detached youth worked in each ward in my constituency."

8. Environment and energy
"Work with government at all levels to develop a green technology centre in the north of the borough and maximise the use of locally produced combined heat and power for local public, private and community buildings."

9. Crime
"Launch renewed witness appeals for all serious local crimes which have not yet been solved, starting with those responsible for the death of Daniel Herbert, and work for improved protection for and support of witnesses."

10. Regeneration and small businesses
"Prioritise the revival of Borough High Street and the Old Kent Road. Start in May a consultation on continuing the one-way system in Borough High Street from Southwark Street to the Borough tube station with widening of pavements, at first for a trial period to start after the end of the utility works later this year. Continue the campaign for improvements at Bricklayers Arms, including removal of the flyover and underpass."

11. Sport and recreation
"As soon as possible to provide a home for a full size BMX track for local young people, either in Burgess Park or for a temporary period until 2012 as part of the Heygate regeneration scheme at the Elephant & Castle or both, and to ensure a permanent home for the Southwark Playhouse."

12. Home!
"During the next five years move from my present home in Lynton Road to another home in the constituency with the highest energy efficiency standards."