The Founder's Place development near St Thomas' Hospital - first proposed more than 5 years ago - was once again on the agenda for Lambeth's planning applications committee on Tuesday night. 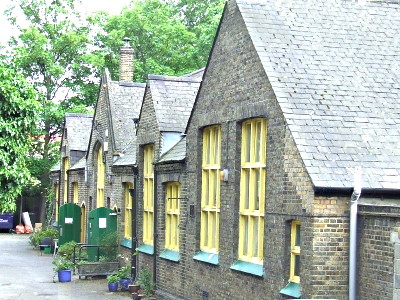 Guy's and St Thomas' Charity wants to redevelop the land north and south of Royal Street – next to Archbishop's Park – to provide new housing and health facilities.

Lambeth Council originally rejected the Terry Farrell-designed proposals in 2005 but after a public inquiry the scheme was eventually approved in 2007 by the then communities secretary Hazel Blears.

For the past two and a half years the scheme has been delayed by the recession which has left the charity unable to find a commercial development partner.

Phase 1 consists of the work south of Royal Street which involves the demolition of the former Holy Trinity School. The old school is not listed but forms part of the Lambeth Palace Conservation Area.

On Tuesday night Lambeth's planning applications committee turned down an application from Guy's and St Thomas' Charity to allow them to discharge some of the conditions on the planning permission by phase rather than for the development as a whole.

Kate Hoey MP voiced fears that the separation of the scheme into two discrete parts would enable the charity to build the 91 private homes in the first phase without any obligation to build the second phase which includes 231 key worker homes.

"I would hope that ... Lambeth can find a way to send a message again to the charity that this is not the way to be working on one of the most prestigious sites in central London, in a conservation area and against the will of people who didn't want that very old school to be knocked down," said Kate Hoey MP.

She warned that the piecemeal approach risked local people becoming cynical about the planning process.

The committee heard from local resident Sarah O'Connell who pointed to the recent upgrading of kitchens and bathrooms in the existing Canterbury House and Stangate blocks north of Royal Street – due for demolition as part of phase 2 of Founder's Place – as evidence that the charity expected the current buildings to remain in place for a number of years.

Planning consultant Nick Taylor of Drivers Jonas, representing the charity, explained that the application was being made to allow the charity to avoid the expense of paying the architects to carry out detailed design work on the entire scheme all at once.

He also insisted that the charity remains committed to delivering both phases of the scheme and would intend to begin work on site later this year if the variations were granted.

The four councillors on the committee voted unanimously to reject the application to vary the conditions on the planning application.

If the charity is to develop Founder's Place in two phases it must also seek a variation of the conservation area consent which requires a construction contract to be in place for the whole scheme before the old Holy Trinity School can be demolished.

"It's as clear as anything that the demolition of the Holy Trinity Centre was acceptable only in the context of the development of the whole site," said Cllr Diana Morris.

"It seems to be me that we are beginning to see all sorts of things that are about the decoupling of the two sites and it seems to me that we need to look at all of those issues together."

Cllr Brian Palmer was similarly unimpressed: "This whole development has been characterised by the arrogance of the [charity] and the lack of trust that has existed between the tenants and hospital authorities," he said.